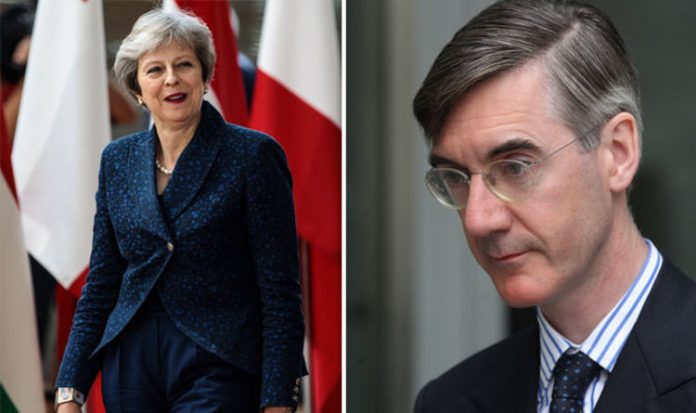 Earlier this week, it emerged the Prime Minister is hoping for a ‘third-way’ approach to customs arrangements with the Brussels bloc.

The plans are expected to potentially allow the European Courts of Justice to have a say on trade disputes and see Britain enter a single market on goods with Brussels.

One Cabinet insider said the arrangement is just a ploy to keep Britain in the EU.

They told the Telegraph: “This doesn’t work.

“It is a distraction designed to keep us in the EU and single market.

“It’s just the customs partnership dressed up with another name.”

Another Government source thinks Brexiteers are frustrated with May ignoring them after two years of debate on Britain’s exit terms.

Somebody familiar with Whitehall said: “Eurosceptic Cabinet ministers feel like they haven’t been listened to by Downing Street.

“They are wondering what on earth all the debate has been about if they are just going to be ignored.”

Jacob Rees-Mogg told the World at One that the Prime Minister is “cheating” the UK.

He said: “The party stood for election saying it would leave the single market.

“It would be a cheat on the market to remain within the single market.

“That doesn’t mean leaving in name but staying in fact.

“It’s just being honest with voters.

“I expect the Prime Minister to do what she said she would do.

“The third way was one of Tony Blair’s great theories.

“The third way is not leaving the EU, what is being proposed is not satisfactory.”