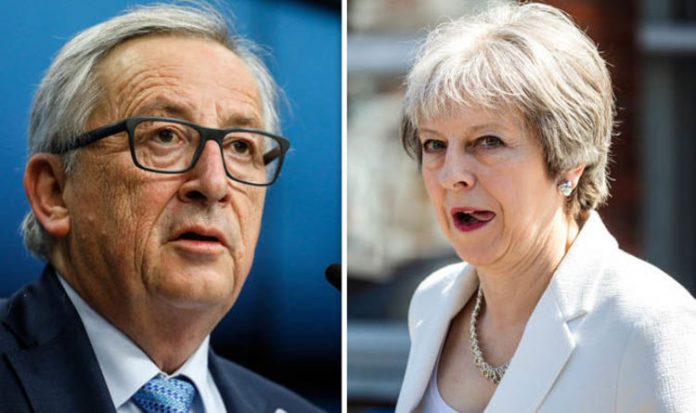 However Brexiteers have raised concerns that Mrs May may be on the verge of softening her Brexit stance after avoiding her inner “war” Cabinet, which previously voted against the Prime Minister’s desired “customs partnership” model.

Speaking exclusively to Express.co.uk, UKIP MEP Jonathan Bullock said: “We are heading for one of the biggest sellouts we have witnessed in British politics.

“Unfortunately the Prime Minister has surrounded herself with remain supporting advisers who wish to push through alignment with the EU and a Brexit in name only.”

Calling on Brexiteers to stand up to the Prime Minister, the MEP added: “I hope those in the Cabinet who support a real Brexit have the guts to challenge this and ultimately resign in protest if she continues on this path.”

MEP Margot Parker concurred with Mr Bullock, and said Mrs May “is a compromiser and has been from the beginning”.

She noted the Prime Minister’s plans had been thrown into chaos by party infighting and that the chance of reaching a compromise at the crunch meeting was slim due to continued deadlock.

The eurosceptic criticised the Prime Minister directly, saying: “If she is promoting being handcuffed to the EU, we cannot go ahead with our trade negotiations with other countries, which is ridiculous.”

Mrs May’s Cabinet is still in deadlock over whether to pursue the maximum facilitation customs option favoured by Brexiteers, or the customs partnership model in which the UK would collect tariffs on behalf of the EU.

Critics have nevertheless argued that the implementation of the max fac system will take too long and could re-introduce a degree of friction at the border.

But Brexiteers have dismissed the customs partnership model as unworkable and Downing Street sources have indicated that the model is “dead”.

Foreign Secretary Boris Johnson commented on the plan, saying: “If you have the new customs partnership, you have a crazy system whereby you end up collecting the tariffs on behalf of the EU at the UK frontier.

“If the EU decides to impose punitive tariffs on something the UK wants to bring in cheaply there’s nothing you can do.”

There are now reports that a third model may be under consideration, but details of the compromise have not yet been released.

Commenting on the ongoing confusion, Ms Parker said: “The Prime Minister keeps saying Brexit means Brexit, no one knows what she thinks it means.

“It seems to be utterly confused.”

He said: “I don’t have to lecture Theresa May, but I would like our British friends to make clear their position.

“We cannot go on to live with a split cabinet. They have to say what they want and we will respond to that.”