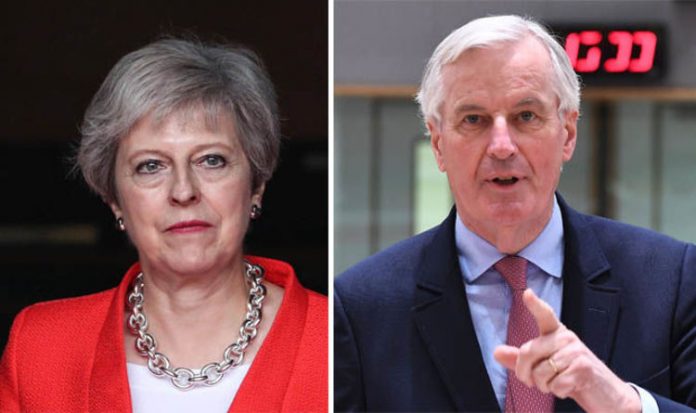 An internal study by the EU Commission estimates that if the UK was free from EU regulations to trade in Europe then British firms could save €6billion a year.

The current proposals, which have been heavily criticised by Brexiteers, suggest the UK remains close with the EU rules on goods while leaving the customs union and single market.

This means UK businesses would no longer be held back by EU regulations on services by entering in an “association agreement” with the EU and includes a “free-trade area” for goods.

However, the EU’s chief negotiator Michel Barnier has said this proposal would “undermine” the EU’s single market.

Furthermore, the European Commission also “offered a very negative assessment of the Chequers proposal” during a briefing meeting on Mrs May’s plans, according to Politico.

The report said: “Barnier’s team were adamant that if Britain formally put forward the plan then it should boycott the talks altogether, according to two officials.”

This scathing revelation comes as the EU has also prepared their own no-deal Brexit plans.

The details of these preparations are also reportedly “very similar” to the no-deal Brexit plans unveiled by Brexit Secretary Dominic Raab.

A source within the European Commission told The Sun that the plans exist, but claimed they are being kept secret to increase the pressure on the UK to accept a soft Brexit deal.

They said: “The EU doesn’t want 20 mile tailbacks as much as the UK doesn’t.

“The thinking is we’ll keep things as they are because the regulatory platform is the same.

“This will stay in place for a few months and then there’ll be a mad dash to get a new agreement in place.”

Earlier this week Mr Raab released a series of Government papers setting out “practical and proportional” advice in case Brexit happens without an exit deal.

Mr Raab said the plans were “not doomsday” and was “still confident” of exiting the EU with as best a deal as possible.

Despite the 25 ‘technical notes’ supplied, Mr Raab said the Government was making sure Britain was “ready” for the worst-case scenario.