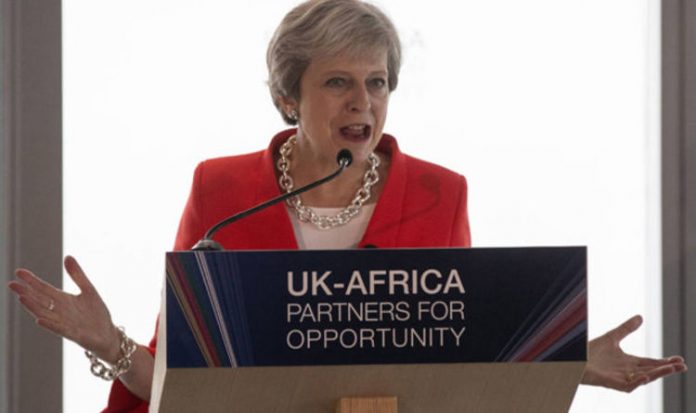 In Cape Town, the Prime Minister confirmed the UK will be ready to carry over an existing EU free trade agreement with six nations, once the UK because it has left the bloc.

It is seen as a model for how Britain can quickly put new trade relationships with countries around the world once it is free to do so after Brexit, by avoiding the need to go back to the drawing board.

If implemented at Brexit, it will roll over to include Britain the EU’s Economic Partnership Agreement with Mozambique plus the Southern African Customs Union which comprises Botswana, Lesotho, Namibia, South Africa and Swaziland , now known as Eswatini.

Those countries will then have the same access to the UK’s markets as they now do to EU markets.

It is the most advanced statement of progress yet of around 40 existing EU trade agreements the UK is aim to roll over to beyond Brexit and builds on a joint declaration delivered last year.

The southern African deal covers trade in goods worth around £5billion, but is part of moves to safeguard total goods and services trade worth some £10billion between the UK and the region.

Earlier in a speech to business people, including a delegation travelling with her from the UK, she strongly defended British aid as something that “works” with proud achievements ranging from immunising hundreds of thousands of children to helping millions of girls get education who would otherwise be denied it.

But she also set out her determination for UK aid spending to be re-focused also to help private companies boost growth and jobs.

Mrs May rejected a suggestion she had come “late to the party” in terms of visiting the fast growing continent.

No British on has made a substantial visit to Africa since 2011.

Mrs May said in her speech that Britain might not be able to match the economic might of some other foreign governments investing in Africa but could offer long-term investment of high quality and ethical expertise.

Pressed on the South African government’s controversial plan to change the law to enable white-owned farmland to be seized without compensation for redistribution to black owners, which Donald Trump has condemned.

Mrs May said: “The UK has for some time now supported land reform, – land reform that is legal, transparent and generated through a democratic process. I welcome the comments President Ramaphosa has made about approaching land reform bearing in mind the economic and social consequences.

“He’s made reference to ‘no smash and grab’ land reform.”

She also stressed that foreign investors wanted the countries they work in to be stable.

Mrs May also announced she will sign on Thursday a new agreement in Kenya to send back huge sums of money illegally removed from the nation, to be invested in Kenya’s future.

Sources said the money was siphoned out of Kenya by corruption and crime, and concealed in banks and assets in the UK.

Stolen funds found in Britain can now be used to fund development projects in areas like health and education.

It includes over £3.6million in proceeds of crime seized by courts in Jersey. The UK and Kenya governments will discuss how the money will be used.

In her speech, Mrs May warned that “corruption and dirty money both have the potential to push development off course by undermining the rule of law and diverting money out of the economy”.