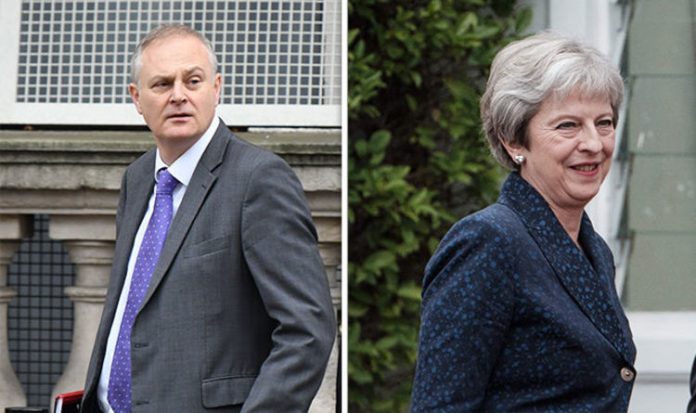 In the latest blow to Theresa May’s negotiating strategy, Stewart Jackson, who was special advisor to David David before his resignation in July, said Chequers deal imposes a cost that “is frankly not worth paying”.

He spelt out in an article for the Telegraph why he firmly believes ‘Canada-plus’ is the ideal, but that plans for WTO deal should “reign supreme” over Chequers.

Mr Jackson said: “The WTO rules are the foundation of open trading systems between nations: it is the goal of the WTO to reduce trade barriers, not to impose them.

“Our trade with countries with whom we don’t have preferential trading arrangements are underpinned by WTO rules and network of Mutual Recognition Agreements which we would and should replicate.

“There is no reason why other countries who want to trade with us won’t want to do this.”

The Prime Minister may have trouble getting her Brexit agreement through the Commons, especially after David Davis confirmed this week that he will be voting against the bill due to be put to MPs in six months time.

Mr Jackson served as the Conservative MP for Peterborough from 2005 – 2017, before being beaten to his seat by Labour MP Fiona Onasanya in the snap General Election.

He was appointed to be David Davis’s chief of staff and special advisor when he became Brexit Secretary, but followed him to the door after the Chequers plan was announced.

He said yesterday: “A bad deal with the EU – like chequers – is one that extorts a high price for trading with its members, forces us to be under the jurisdiction of the European Courts and opens our borders to unrestricted movement of EU citizens.

“When other countries such as Japan and Canada has trade deals that require none of those conditions, why then should the UK – the EU’s largest export market – tolerate such conditions?”

Mr Jackson added WTO would allow the UK to take skilled workers from countries outside the EU, such as India, New Zealand or the United States.

It also would allow the UK Government to set its own tariffs, reducing them where it would promote greater trade and economic growth.

Far from falling off a “cliff edge” as some have described it, Mr Jackson asserted these international rules are preferable to an arrangement that restricts our trade options or requires freedom of movement as a prerequisite.

He said, if we left Brexit without a deal with the EU, we would accelerate trade deals with the United States (Trans-Pacific Partnership) and direct negotiations with key countries with whom we have Free Trade Agreements through the EU – such as Switzerland, South Korea, Mexico and Canada.