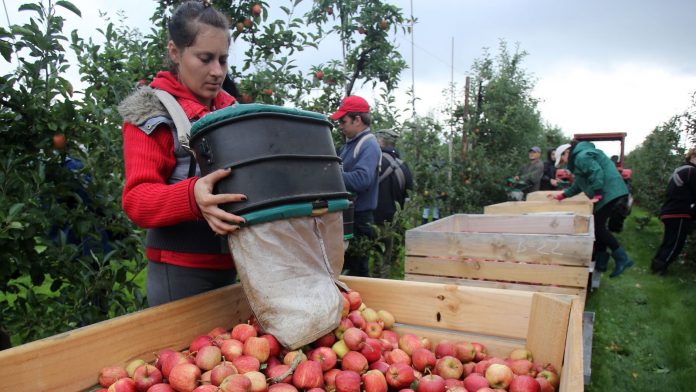 British farmers will be given the green light to recruit up to 2,500 migrants a year to alleviate labour shortages.

Non-EU nationals who come to Britain to pick fruit and vegetables will be able to stay for six months.

Ministers have drawn up the seasonal work scheme to supplement the agricultural sector, which relies on 75,000 temporary migrants to work on UK farms.

Home Secretary Sajid Javid unveiled the plans, promising the government would support British farmers “in any way we can”.

He said: “This pilot will ensure farmers have access to the seasonal labour they need to remain productive and profitable during busy times of the year.

“I am committed to having an immigration system that reduces migration to sustainable levels, supports all industry and ensures we welcome those who benefit Britain.”

Michael Gove, the environment secretary, said: “From lettuce in East Anglia to strawberries in Scotland, we want to make sure that farmers can continue to grow, sell and export more great British food.

“This two-year pilot will ease the workforce pressures faced by farmers during busy times of the year.

“We will review the pilot’s results as we look at how best to support the longer-term needs of industry outside the EU.”

The news was welcomed by Minette Batters, president of the National Farmers Union, who called it as a “major victory”.

She said: “It follows two years of evidence from the NFU, growers and MPs that a shortage of workers has been hampering food production.”

Ms Batters added it was a “recognition from the government that British horticulture is a successful, thriving sector which faces some unique challenges but is capable of producing more great, healthy British fruit and vegetables for people to eat”.

But the executive chair of fruit growers’ body English Apples and Pears, Ali Capper, said: “We need more than 11,500 seasonal workers by 2021 to keep pace with a crop that is set to grow.

“Right now, the pilot permits us to recruit 2,500. This is simply not enough and our growers are already struggling to recruit workers. Some 41% have seen fewer applications for seasonal picking work this year, and 61% believe 2019 will be even worse.

READ  Kate Middleton joy: How the Duchess of Cambridge is ‘over the moon’ to see Queen | Royal | News (Reports)

“Whilst this pilot is a step in the right direction, we urge the Government to consider a larger scale solution. Without the right number of seasonal workers, our best-in-class British apples and pears could be left to rot on trees.”

The Home Office said it would be a tightly controlled regime, with return rates carefully monitored and provisions in place to close the route if it presents a threat to immigration controls.

But Labour’s shadow environment secretary Sue Hayman said: “This action comes too late for many farmers who have been on their own in dealing with chronic labour shortages since the Tories decided to needlessly scrap the Seasonal Agricultural Workers Scheme. Labour will reinstate it.

“A disastrous no deal scenario is now a very real prospect thanks to Theresa May’s shambolic handling of Brexit, putting farmer livelihoods and the UK’s long-term food security at risk.”