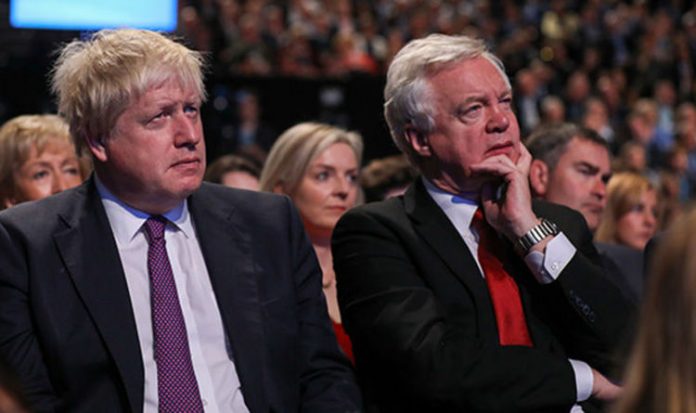 Meanwhile Boris Johnson, who quit as Foreign Secretary on the same day, was having “big rows” with Prime Minister Theresa May in the build-up to last week’s crunch talks, according to eye-witnesses.

A friend of Mr Davis told The Times Mr Davis remarked: “Chequers was an ambush. I would have had to machine-gun my way out.

“If I had resigned I would have called a Daimler and done it in style.”

Mr Davis has threatened to resign on a number of occasions since his appointment as Brexit Secretary after the 2016 referendum.

His letter to Mrs May states: “As you know there have been a significant number of occasions in the last year or so on which I have disagreed with the Number 10 policy line, ranging from accepting the Commission’s sequencing of negotiations through to the language on Northern Ireland in the December Joint Report.

“At each stage I have accepted collective responsibility because it is part of my task to find workable compromises, and because I considered it was still possible to deliver on the mandate of the referendum, and on our manifesto commitment to leave the Customs Union and the Single Market.

“I am afraid that I think the current trend of policy and tactics is making that look less and less likely.”

Speaking to LBC’s Iain Dale, during an interview in which he first learned of Mr Johnson’s resignation, Mr Davis also appeared to take a swipe at his erstwhile colleague, saying: “This was central to my job and if we continue with this policy and I was still there, I’d have to present it in the House of Commons.

“I don’t think it’s central to the foreign secretary. It’s a pity, but there we are.”

Mr Johnson’s decision, which he announced yesterday, came at the end of months of unhappiness at the Government’s strategy, during which he was apparently talked out of resigning by former Prime Minister David Cameron.

A friend claimed he and Mrs May had clashed angrily on several occasions, explaining: “They were properly shouting at each other.”

At Chequers, Mr Johnson famously referred to Mrs May’s deal, which he and fellow hardline Brexitees will keep the UK too closely tied to the EU, as a “polished turd”.

However, he offered no objections when the three-page conclusions were distributed, and even raised a toast to the compromise at dinner.

But as time wore on he appears to have had second thoughts, as indicated in his resignation letter, which stated: “On Friday I acknowledged that my side of the argument were too few to prevail, and congratulated you on at least reaching a cabinet decision on the way forward.

“As I said then, the government now has a song to sing.

“The trouble is that I have practised the words over the weekend and find that they stick in the throat.”