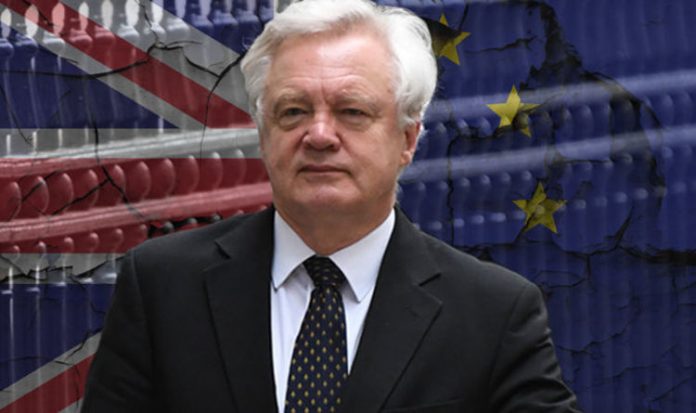 The Prime Minister unveiled her Brexit plan in a 98-page white paper on Thursday which included concessions to the EU in a bid to break the current standoff with Brussels.

As part of the plan Britain has offered Brussels an opportunity to develop a comprehensive “free trade area for goods” with a “common rule book” in order to deliver frictionless trade between the UK and EU.

The white paper also proposes a new Joint Committee to handle disputes between the UK and EU instead of the ECJ.

Mrs May’s white paper has sparked backlash in her Cabinet with key Brexiteers Boris Johnson and David Davis resigning from their posts in the Government.

Announcing his resignation around 48 hours after the Cabinet’s Chequers meeting, Mr Davis said he could not continue to work in a government where he could not deliver the people’s vote to leave the EU.

And now in a column for the Sunday Times, the former Brexit Secretary has painted a bleak future for negotiations as he warned the UK is now in a much weaker position.

Mr Davis said: “It augured a bad day when the cabinet decided by a majority of about three to one to make concessions to the EU that were so fundamental they risked undermining the whole Brexit process.

“These were described by the European Commission as the UK’s ‘red lines’. In fact they were the democratic decisions of the British people.”

He added: “None of this really amounts to taking back control.

“What is more, it is likely that the EU, having achieved a break in the UK’s position, will simply pocket the concessions and ask for more.

“For that reason alone this is a very bad decision.”

“As President Trump’s intervention last week showed, the harmonisation of our regulations with the EU will radically reduce the sort of trade deal we could do with America, and many of our other prospective trading partners.

“It was noticeable in his diplomatic dance on Friday to be properly courteous to our prime minister, he did not actually withdraw any of his devastating critique from the day before.

“This should not surprise us. Even the Government’s own white paper admitted to the problems this would create.”

Mr Davis then went on to detail how the UK could still pursue a hard Brexit addressing the issues of the Irish border.

He said: “Under no circumstances will the UK install a hard border in Northern Ireland. That is a given.

“What people also forget is that there is already a border there. VAT, excise duties and other taxes differ north and south of the border. The customs authorities manage this now by careful intelligence-led policing of goods movements, which is exactly how it will work in the future.

“EU concerns about Northern Ireland becoming a back door into the EU for third-country goods is easily manageable. Much is made of the nearly 300 crossing points on the border, but little of the fact that there are barely half a dozen ports.

“This means surveillance on goods from the rest of the world into Northern Ireland is comparatively easy.

“This is hard work but the reward it will deliver is enormous.”

However Mrs May has insisted her concessions in the white paper are a better option than what the European Union had proposed.

Speaking on the BBC’s The Andrew Marr show today, the Prime Minister said: “What we did with the Mansion House speech was set out was an approach we would take but the response from the European Union leaders has been very clear and they have put two options for us on the table.

“Neither of those two options are acceptable. So we’ve done something else.”

Asked when she came up with the plan for the common rule book, Mrs May replied: “This is something that has been gestation for some time and the reason it has been there is because we have been talking to the European Union and they have made clear that what we proposed in Mansion House, on this particular aspect was not negotiable.

“I have been talking with David Davis about the approach we should be taking for some time.”