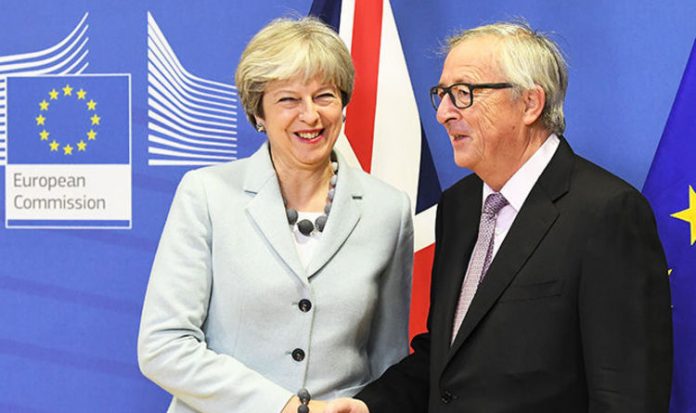 Guntram Wolff, head of the influential Bruegels think-tank, urged EU negotiators to be “confident enough” to reach an agreement with Mrs May.

He said Brussels should embrace the Prime Minister’s Brexit white paper for the sake of maintaining good relations with the UK.

The document, published earlier this month, laid out Mrs May’s proposals for a future relationship between the UK and the bloc.

It was widely panned by Brexiteers who claimed her proposed solution to the Irish border issue would lead to a soft Brexit.

Under the plans, Britain would accept a ‘common rulebook’ for future trade with EU member states.

Mr Wolff said the offer was “not a done deal yet” because Theresa May is still trying to agree a “fair balance of rights and obligations”.

But he said Brussels negotiators should show more flexibility or risk harming their diplomatic ties with the UK.

The economist added: “The prospect of no deal whatsoever and a period of several years with severe limits on trade remains high.

“A lot of the white paper is unacceptable and needs to change.

“But it looks like a good moment for the EU to strike a geo-politically motivated bargain with the UK, or risk losing the UK as a strategic partner.

“Whether Europe will be confident enough to do so remains to be seen.”

Mr Wolff’s comments came as Brexit Secretary Dominic Raab said he would not “wallow in pessimism” about the impact of Brexit.

Speaking to MPs on Tuesday, Mr Raab insisted the UK would “still be able to thrive” if Mrs May fails to agree a deal with the EU.

He said: “What I’m not going to do is wallow in pessimism about the state of this country in relation to Brexit.

“We we are going to go into these negotiations with economic confidence and political ambition.

“I think we will be braced for all the eventualities.”

Mr Raab said the Prime Minister’s exit plan was a “road map” to a final deal which respects the 2016 referendum result.

The Brexiteer added: “We are at a mature stage in these negotiations. This isn’t our opening pitch.

“This is a far advanced, well thought-out, principled and pragmatic document and we expect to negotiate on the basis of it.

“This is an ambitious approach which takes into account some of the concerns the EU has expressed to us.”