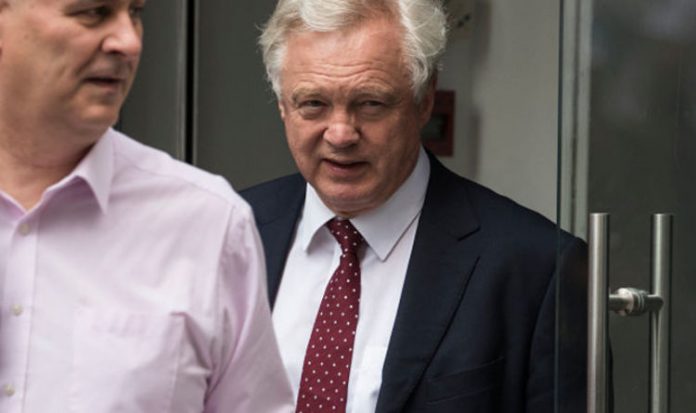 Former Brexit Secretary David Davis first started work on the plan, which is based on first class deals between the EU and other nations such as Canada, Japan, South Korea and New Zealand.

But the paperwork remained unfinished following his shock resignation last month after locking horns with Mrs May over her current Chequers arrangement.

The document has now been left in the hands of Mr Davis’s successor Dominic Raab to finish and is said to be a backdrop option in case the Chequers deal falls through.

David Davis told the Telegraph: “When we get to October if we have got no resolution we have got a real-time problem.

“If there exists an off-the-shelf and fully written-up treaty – a complete legal text – we can then go round to the European states and say this is much better than no deal.

“I called it the reserve parachute. It’s ready to go. It would be attractive to European countries wanting to avoid no deal and losing the £39 billion Brexit divorce bill.”

The option would eliminate tariffs and rely on a system of “mutual recognition” when it comes to standards of manufactured goods, drawing a stark comparison against Mrs May’s Chequers compromise that keeps the UK shackled to the EU’s rules on goods.

The reserve parachute is based on World Trade Organisation agreements and “trusted trader” schemes similar to Canadian and Japanese trade deals that reduce the need for customs checks.

It also mirrors New Zealand’s deal with the bloc which minimises checks on agricultural goods.

He said: “If the public decides we have not met the requirements of the referendum and are delivering Brexit in name only they will punish us.”

A No 10 source said: “We are working hard to promote the Chequers deal to the EU.

“It is a good and pragmatic deal that allows us to leave the single market and customs union. That is what we are focusing on.”

News of the reserve parachute comes after newbie Mr Raab sparked fears after insisted he would ensure the UK had adequate food supplies post-Brexit.

His remarks were mocked as “ridiculous” by supermarket bosses, who not only blasted Mr Raab’s comments as a show of “complete naivety” but also dismissed hints that stockpiling should fall under the responsibility of the food and drink industry.