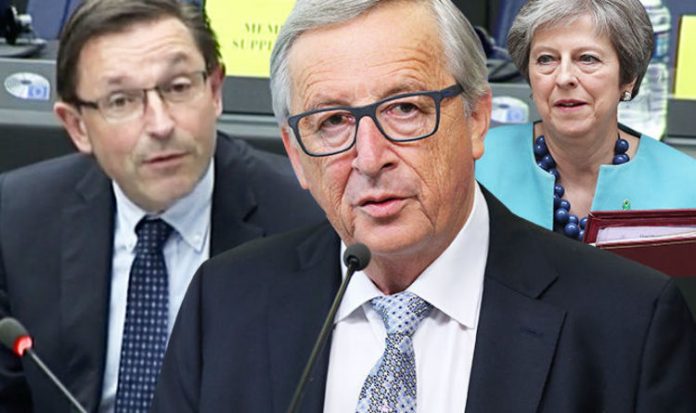 The European Commission, the EU’s executive body, has been steadily increasing its “preparedness” for Britain leaving the bloc without an agreement, with Jean-Claude Juncker leading the warnings.

Addressing MEPs, Pascal Leardini, who leads a dedicated Commission team preparing for no deal, told MEPs they should prepare for “all eventualities” in the latest warning of its kind.

The Commission has published a number of documents hoping to inform citizens and stakeholders about the changes they can expect from a no deal Brexit – including the effect on banking services, trademark and aviation safety.

Martin Selmayr, the Commission’s Secretary-General, has previously told MEPs Britain would have to be added to either the “visa-free” or “visa-required” list as an example of the no deal preparations being undertaken.

When asked by MEPs about the current state of Brexit preparedness, Mr Leardini replied: “Some members have asked ‘when is the point of no return?’

“We don’t know. We have to be prepared for all eventualities.

“It is more important than ever that the Commission works with member states.”

Many of the changes needed in the event no deal Brexit will be “simple” for the 12-strong group of civil servants working under Mr Leardini while others will be far more complicated, he added.

Mr Leardini said the hundreds of databases and IT systems linking Britain and the remaining EU27 would require “technically challenging” adaptations.

He added: “For some, a simple removal of the UK will be sufficient.

“For other systems, it’s more complicated. There may be issues of data protection, data retention, that require more detailed analysis and work to be ready on time.”

Guy Verhofstadt, who was also in attendance at the committee hearing, declared himself not satisfied with the UK’s plans for EU citizens hoping to remain in the country after Brexit.

The Parliament’s Brexit handler bemoaned the UK Government’s decision to charge a £65 registration fee to remain in the country if they do not hold a permanent residence card.

Britain’s plans allow those who have been continuously living in the country for five years to be eligible for “settled status”, which offers the same benefits, such as healthcare, as UK citizens.

Mr Verhofstadt said: “It is unacceptable that citizens who were never consulted on Brexit should have to pay to retain their existing rights.”

The influential MEP has co-authored a letter with Labour counterpart Claude Moraes will demand EU nationals will not be charged if they were already in Britain when Theresa May started Brexit negotiations in March 2017.