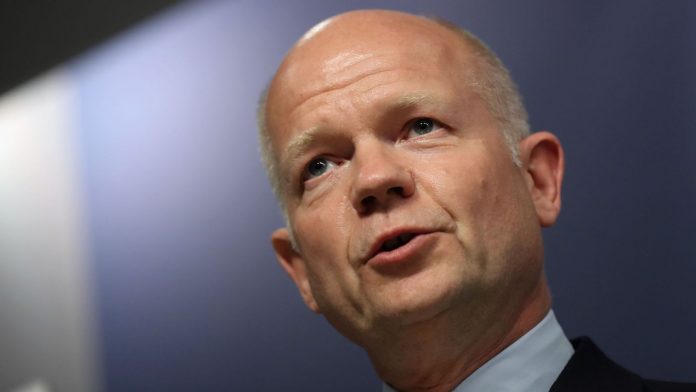 Former Conservative Party leader William Hague has warned cabinet Brexiteers not to push their demands with the European Union too far.

In a blunt cautioning to his colleagues ahead of crunch cabinet talks at Chequers on Friday, he said parliament could force a “watered-down” Brexit on the government if ministers fail to agree a compromise on the UK’s future customs relationship with the EU.

He said any minister who chose the Chequers talks to quit would show they were not fit to hold high office in the first place.

His warning comes amid reports of possible leadership challenges from ministers unhappy with Theresa May’s position on Brexit.

Lord Hague added that the “vast sensible middle” of the Tory party “deeply dislike naked manoeuvring to become the next leader”.

Writing in The Daily Telegraph, he said: “Flouncing out, just when the going gets tough but when the EU Withdrawal Act has been successfully enacted, will look like evading responsibility for choices that were inevitable just when important progress has been made.”

His warning is a thinly veiled shot at senior ministers, including Foreign Secretary Boris Johnson, who have reportedly been considering resigning if the prime minister gives Remainers too much leeway.

On Monday Mr Johnson publicly defended backbencher Jacob Rees-Mogg, who warned Mrs May she faced her government collapsing if she failed to deliver on her Brexit promises.

Foreign Office minister Sir Alan Duncan accused him of “insolence” but Mr Johnson said Mr Rees-Mogg was “a principled and dedicated MP who wants the best for our country”.

Lord Hague warned Brexiteers did not have the numbers in parliament to force through a “hard Brexit”, urging them to think of the consequences of creating a leadership crisis.

“Everyone threatening Theresa May with chaos, revolt, resignations, and a leadership election if she doesn’t do as they wish needs to think carefully about what might be the consequences of their actions,” he said

“A vote of no confidence in the leadership called on this issue would in all probability rally the sensible middle to the Prime Minister.

“If ardent Brexiteers push too hard, they will end up without their main objective. If there is no agreement this week on a plan for customs arrangements, the Commons will be much more likely to vote in the near future to stay in the customs union in its entirety.

“The choice is either to back a compromise plan now or to end up with a more watered-down version of Brexit that would be forced on ministers anyway.”

Lord Hague also said the concerns of businesses such as Airbus and BMW “cannot be dismissed”, in reference to Mr Johnson reportedly saying “f*** business”.

He said the infighting was allowing the EU the upper hand, to make “zero concessions and prepare to impose its own terms on the UK in the absence of any alternative proposals”.

“This is meant to be a government negotiating a momentous international agreement not a debating society that has forgotten to impose a time limit on speeches,” he added.