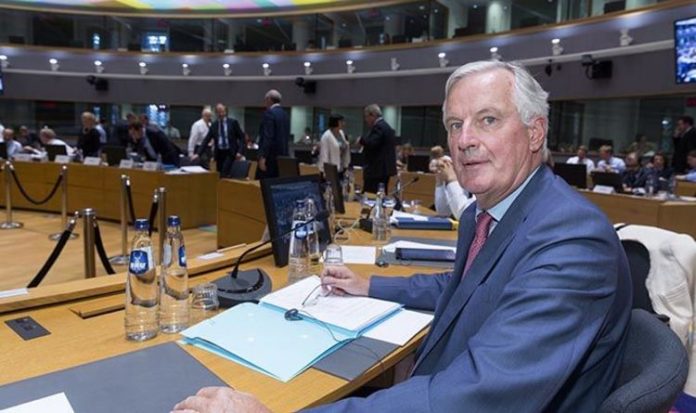 The EU’s so-called ‘backstop’ plan, which would involve the creation of a physical customs border on the Irish Sea, has been rejected by unionist politicians in the north and the UK Prime Minister.

Brexit negotiator Michel Barnier indicated earlier this week that he would look at compromising on the topic.

And it has now emerged that the remaining 27 leaders of the EU will discuss the issue, without Theresa May, over lunch during their Salzburg summit today.

But a diplomat reportedly told Bloomberg that they will be looking less at a change of approach and more at duping British negotiators – as the ‘backstop’ will be “camouflaged as much as possible”.

Eurocrats reportedly want to create the impression that they can minimise the number of physical checks on goods entering Northern Ireland from the rest of the UK.

The EU’s original proposal angered members of Mrs May’s Conservative Party and the Northern Irish Democratic Unionist Party she relies on to force legislation through the UK Parliament.

They say it would effectively allow the EU to annex Northern Ireland by keeping the region inside the bloc’s customs union and single market.

Mrs May previously complained this would effectively slice Northern Ireland away from mainland Britain, a position staunchly backed by her pro-British allies in Belfast.

The pressure on both sides to reach an agreement is mounting, with just over six months to go before Britain leaves the EU.

But DUP deputy leader Nigel Dodds savaged the ‘backstop’ option, however it is presented.

He said: “The fundamental point is that internal UK checks are only needed if it is intended to separate Northern Ireland from Great Britain.

“Despite the talk of ‘improvements’ the backstop being insisted upon by the EU… still means a border down the Irish Sea although with different kinds of checks.

“The fact is that both Theresa May and the Labour Party have said no British prime minister could accept such a concept.”