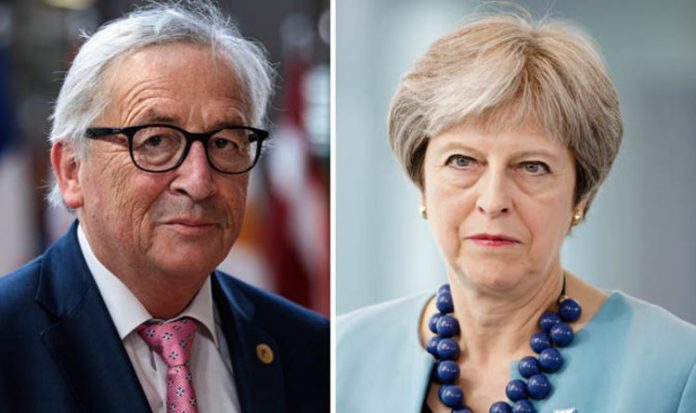 The Prime Minister broke the deadlock within her Cabinet and resolved the Government’s policy in regards to trade and the UK’s post-Brexit customs arrangement with the EU.

Mrs May has proposed a UK-EU free trade area which would establish a common rulebook for industrial goods and agricultural products.

However, she has signalled that different arrangements would be made for services, which make up around 80 percent of the UK economy, where the Government is seeking a greater degree of flexibility.

Speaking exclusively to Express.co.uk, independent MEP Nathan Gill commented on the proposals, saying: “If we present a sector by sector draft trading arrangement it then befalls the EU to reject it as ‘cherry picking’.

“This would visibly expose them as an obstinate business-blocking entity.”

Exporters would therefore be charged EU tariffs, and the UK would be obliged to transfer collected duties back to Brussels.

Mr Gill noted that the Government should avoid ideological stances on the UK’s post-Brexit customs arrangement, which have led to the resignations of David Davis and Boris Johnson, and instead listen to the concerns of British businesses.

He said: “Our approach should take on board recommendations from businesses and social sectors from across the continent, rather than merely represent ideological interests defined as ‘hard’ or ‘soft’ Brexit.”

He warned that if the UK and EU fail to reach a viable compromise on the UK’s customs proposal, the transition period and Article 50 deadline may be extended for an unspecific period time.

Commenting on the likely outcome of ongoing deadlock, he said: “Sadly a continuation of the status quo and extension of a transition period under full EU control or even a postponement of Article 50.

“The biggest threat being we would be blocked from negotiations with other countries while this continues.”

Michel Barnier, the EU’s chief Brexit negotiator, has nevertheless signalled that significant progress has been made in the Brexit negotiations and raised hopes that a full agreement can be achieved by the October deadline.

Speaking at the Council on Foreign Relations in New York on Tuesday, Mr Barnier said: “After 12 months of negotiations we have agreed on 80% of the negotiations.

Highlighting his desire to conclude a full agreement with the UK, he added: “No deal is the worst solution for everybody. It would be a huge economic problem for the UK and also for the EU.

However he sent a warning to the UK that the EU was continuing to prepare for a “no deal” outcome.

In a final slight to the UK, he concluded: “It will be clear, crystal clear at the end of this negotiation that the best situation, the best relationship with the EU, will be to remain a member.”