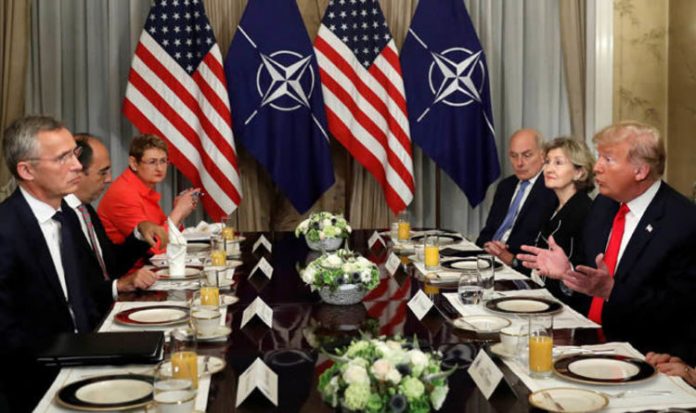 In a sign of the rows which are expected to take place over the two day summit, Mr Trump questioned why Germany pays billions of dollars to Russia for gas supplies but then demands that the US defends it from Russia.

Mr Trump has made it clear that he is considering pulling American military and cutting spending on defending Europe unless other Nato partners pay their fair share.

Currently the UK is one of the few Nato members to meet the minimum of spending two per cent GDP on defence and security.

In an angry rant, Mr Trump said: “Germany pays billions and billions of dollars to Russia every year for gas.

“But Germany wants us [the US] to protect it from Russia.

“I think that is inappropriate.”

He went on: “Germany is a captive of Russia. It gets 70 per cent of its energy from Russia. Germany is totally controlled by Russia.”

The US President pointed out that Germany only pays one per cent of GDP on defence while the US spends 4.2 per cent.

He also noted that other European Nato allies such as Poland refuse to buy Russian gas because they do not want to be “captives” of President Putin’s regime.

He said that “free trade is a wonderful thing” but added that “energy is something different” and buying it from Vladimir Putin’s regime is “unacceptable”.

Mr Trump also attacked the French for failing to spend two per cent and his administration has told Theresa May that Britain needs to spend significantly more than the two per cent minimum.

He said: Countries need to step up, not over a 10 year period, they have to step up immediately.”

He pointed out that other US Presidents had raised the issue but “did not do anything about it”.

The Nato conference is set to debate defence spending and contributions but is overshadowed by the Novichok nerve agent attack in Salisbury which has been blamed on Moscow and led to the death of a British woman Dawn Sturgess.

Police think her death is linked to the attack on former Russian spy Sergei Skripal and his daughter Yulia.