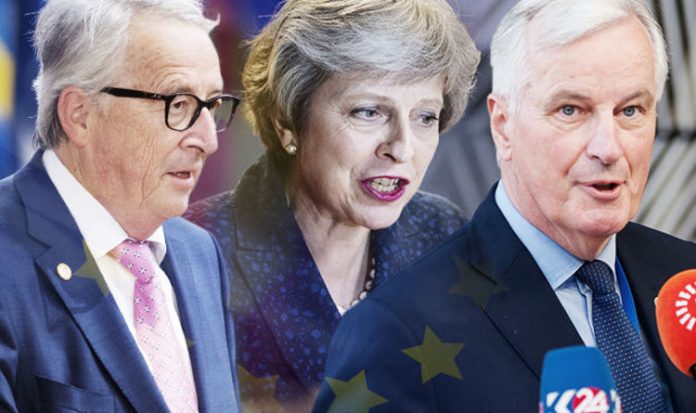 Theresa May will gather her Cabinet for an away day at Chequers on Friday in order to hammer out the final details of a new post-Brexit customs plan, which will be set out in a white paper the following week.

Doubts have already been cast on the Prime Minister’s ability to please her divided Cabinet team as well as meeting Michel Barnier’s demand for a “realistic and workable” proposal, according to several member states.

One EU diplomat told Express.co.uk it is becoming more likely by the week that Brussels and Britain will fail to conclude the Brexit withdrawal agreement by the looming October deadline.

Other EU sources, who have claimed to have seen drafts of Mrs May’s highly anticipated future plans, told the Guardian the proposals are already unacceptable.

One EU official said: “We read the white paper and we read ‘cake’.”

Another source bemoaned Britain’s lack of apparent preparation for a no deal scenario, pointing at the work done by other EU member states.

A senior Conservative source admit they would be “honestly surprised” if a deal was concluded in time for the next European Council summit in October, insisting there is nothing to worry about.

The source said Britain should not be concerned by EU member states ramping up their no deal preparation as the work, which is occurring both sides of the Channel, is actually making a deal more likely.

“I don’t think the no deal EU preparations should concern us unduly, and I hope that we’re doing the same thing,” they added.

“You know Brussels, a deal is done when the coffee goes cold and it goes onto the very last minute.”

Nonetheless, the Prime Minister is expected to pile on pressure on Brexiteers to accept a Norway-style deal or a simple free-trade agreement after her chief Brexit negotiator said there was little chance of striking a bespoke deal with the EU.

Oliver Robbins, Mrs May’s EU sherpa, told top ministers before their Friday meeting at Chequers they have to be realistic about what they could achieve.

He is said to have warned secretaries of state that Mr Barnier is under no pressure to soften their stance, despite the Prime Minister asking them to intervene last week.

“I came out of the meeting and thought we were even more screwed than we were before,” a Government source told The Times.

“I was surprised he admitted how bad it was. If I had to gauge where we are, I would say Downing Street is moving towards the Norwegian model.”