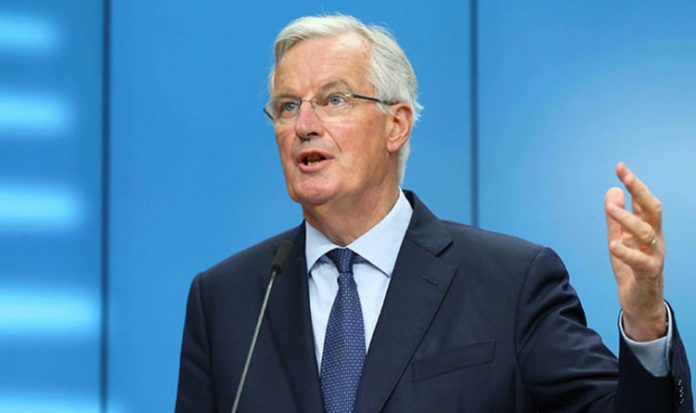 EU chief negotiator Michel Barnier told European affairs ministers that Prime Minister Theresa May’s proposal could not be accepted as it threatens to water down the bloc’s “decision-making autonomy” when it comes to finance.

Theresa May’s Brexit White Paper has called for “expanded” equivalence – where the UK must prove it is following laws to gain access to EU markets – which rejects the existing models as “not sufficient to deal with a third country whose financial markets are as deeply interconnected with the EU’s as those of the UK are”.

But Mr Barnier shot down the plans for London saying it was incompatible with the EU’s stance that equivalence decisions must be made unilaterally by Brussels and would amount to a “system of generalised equivalence that would in reality be jointly run by the EU and UK”.

Equivalence is a framework where the Brussels bloc acknowledges that the legal, regulatory and supervisory regime of a non-EU country is as good as its own, which allows state access to the financial services sector within the EU.

Countries like Singapore and the US already use a similar system to trade financial services with the EU.

However Mrs May’s government said the rules were “not sufficient to deal with a third country whose financial markets are as deeply interconnected with the EU’s as those of the UK are.”

Therefore, her White Paper sought to use those rules as a basis for a deeper arrangement between the UK and EU.

But Mr Barnier said the plan was incompatible with the EU’s stance that equivalence decisions must be made unilaterally by Brussels, according to the Financial Times.

During a press conference, Mr Barnier was careful not to reject Mrs May’s plans outright saying Brussels would “engage constructively” with UK negotiators.

The news is another blow for the Prime Minister who is still trying to persuade members of the Cabinet that her Chequers compromise agreement was “the best plan to get the best deal”.

Brexit Secretary Dominic Raab has said Mr Barnier wanted to do a deal with the UK but that the Brexit Secretary was prepared for a no deal scenario if talks fail by October.

Mr Rabb told BBC’s Andrew Marr: “I am striving with my department, with Michel Barnier who I think is a man who wants to do a deal with us, there are tremendous pressures on his side, to get the best deal.

“But I think we have got to, I think it is the only responsible thing to do, to be prepared if those negotiations and the energy, the ambition, and the pragmatism are not reciprocated.

“So that is the responsible thing to do, whether it is the allocation of money, the preparation of our terry relations, we are hiring extra border staff.

“I think people need to know that we are ready, so that Britain can thrive whatever happens.”