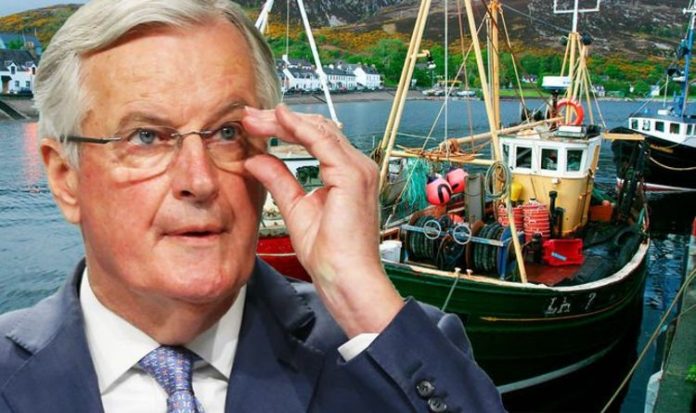 Brexit trade talks have reached a crucial moment as the deadline for the transition period at the end of December looms. EU negotiator Michel Barnier warned his counterpart David Frost that progress is needed to stop Brussels walking away, and demanded that the UK compromise on key issues to keep negotiations alive. One of these issues is fisheries. Mr Barnier wants EU vessels to be granted continued access to UK waters, telling Mr Frost and his team that without this Britain could be excluded from European markets.

But Brexiteer Tory MP, Andrew Bridgen, tells Express.co.uk that the EU’s demands are “absurd” and cannot be accepted.

He said: “It’s like someone renting a property off you, terminating the agreement, and then demanding they keep 80 percent of the back garden.

The MP for North West Leicester believes a deal can be done, but still warned there is a danger of no deal.

Mr Bridgen added that while the UK wants sovereign control over British waters, European vessels can still be granted access.

He continued: “We must regain full control of fishing grounds. That doesn’t mean we aren’t going to allow some access to EU fishermen, but it will be on a yearly quota basis to allow the UK industry to expand over time.”

The loss of UK fishing waters could hit European countries such as France hard.

It added that this could “reduce the availability and choice of products and will increase price, which could impact vulnerable groups”.

In addition, Yellowhammer warned the flow of cross-Channel goods could face “significant disruption lasting up to six months”.

The report concluded: “Unmitigated, this will have an impact on the supply of medicines and medical supplies.

“The reliance of medicines and medical products’ supply chains on the short straits crossing make them particularly vulnerable to severe extended delays.”