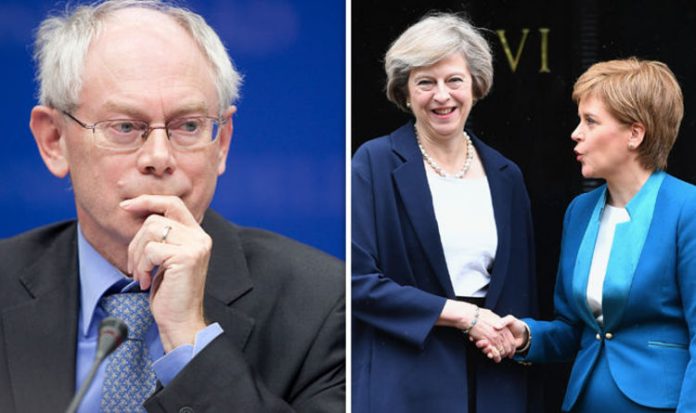 Herman Van Rompuy, the ex-Belgian Prime Minister, has issued the stark warning noting the UK Government’s threat of a no deal Brexit was simply an “operation fear” tactic.

However, Mr Van Rompuy claimed the EU will not fall for it and it will actually cause internal damage to the UK.

He told the Observer: “The no-deal issue is not just a problem for the UK or Brussels.

“It is also an existential threat to the UK itself.

“One can imagine that a no deal will have a big impact and cause concern in some of the regions.

“Speaking of Scotland, it could have consequences for them and others.”

The former Council president continued: “We could end up with a situation in which the EU27 becomes more united and a United Kingdom less united.

“This talk about a ‘no deal’ is the kind of nationalist rhetoric that belongs to another era.”

Mr Van Rompuy added no-deal Brexit could also lead to another General Election in the UK.

He said: “If there is no House of Commons support for no deal, then you are very close to new elections.

“If you have new elections, then article 50 will have to be postponed, because it will not be clear that you will have a Government – or a Government with a programme.”

Mr Van Rompui’s remarks come only a few weeks after the Scottish First Minister told Theresa May a no-deal Brexit would be “catastrophic” for the UK.

However, Ms Sturgeon confirmed she will not make the case for another Scottish independence referendum anytime soon.

Conservative MP Sir Graham Brady claimed yesterday the growing fears of a no deal scenario and domestic divisions over Brexit are actually a key part of the EU’s long-term negotiating plan.

Speaking on the BBC’s Any Questions panel last night, the Chair of the 1922 Committee said the EU’s chief negotiator Michel Barnier had “achieved the EU’s main political objective”.

Sir Graham said the current divisions in British politics was “always going to happen” since the EU wanted to make leaving the bloc appear chaotic.