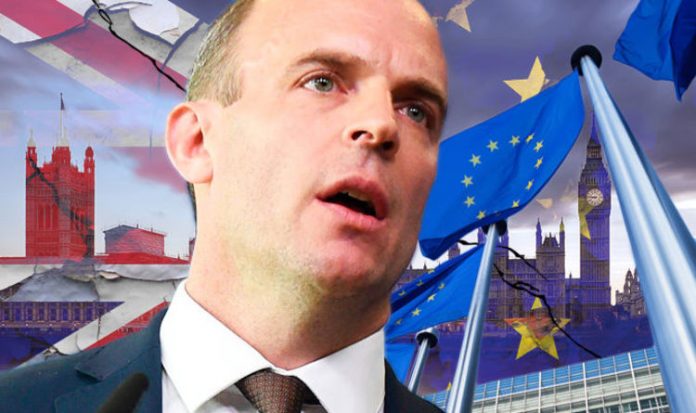 The Lords’ EU Committee is taking the unusual step of convening during its six-week summer recess to quiz Mr Raab on subjects including how the Government plans to solve the Irish border conundrum and what preparations are being made for no deal.

The extraordinary evidence session on Wednesday, August 29 will take place exactly seven months before the UK is due to leave the European Union.

Peers are expected to ask Mr Raab for more details on Theresa May’s Chequers plan, including the rationale behind the proposal and exactly how the Prime Minister’s proposed customs arrangement would work.

The announcement of the emergency House of Lords session comes on the same day as Brussels’ chief Brexit negotiator Michel Barnier warned the UK’s withdrawal agreement may not be completed by October as previously planned.

The Irish border problem is by far the largest hurdle which still needs to be overcome, but UK officials last week admitted little progress has been made.

Both Mr Raab and Mr Barnier have committed to including a workable ’backstop’ solution in the withdrawal agreement – which would kick in to avoid a hard border if no other deal is reached – but exactly how this can be achieved is yet to be agreed.

A spokesman for the House of Lords told Express.co.uk peers are planning to put nine questions to Mr Raab – two of which concern the Irish border.

Another of the questions is to do with preparations for a no deal Brexit, which critics have warned would be disastrous for the economy.

The Government has insisted it has made plans to ensure the “smooth, continued, functioning” of the economy if the UK is unable to secure a deal.

Technical notices advising businesses and the public on what they need to do to prepare for a no deal scenario are due to be published tomorrow (Thursday).

But business leaders have warned the papers must provide “clarity” for firms to ensure free trade is not impacted after the split.

He said: “No-deal preparations should have happened far earlier, and the onus is on Government to move quickly and give businesses as much detailed technical information as possible to avoid significant disruption in any scenario.

“Our test for the Government’s ‘no deal’ notices is straightforward: Do firms now have the clarity they need so that they can continue to conduct business both here at home and across borders on March 30 2019?”

Meanwhile, Mr Raab has insisted EU citizens living in the UK will not be “turfed out” after Brexit in the event of no deal.

He said: “We hugely value the contribution of EU citizens here in the UK and I am confident that in the unlikely eventuality that we don’t have a deal, we will move swiftly to secure their position.