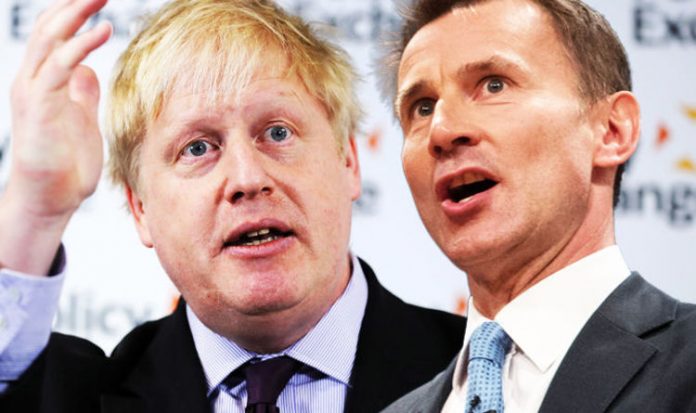 During an diplomatic visit to Japan on Tuesday, Mr Hunt made a snide remark against his predecessor for continuously berating Mrs May’s handling over Brexit negotiations, insisting he and will soon be “proved wrong”.

Mr Hunt told Japanese officials: “British politics is littered with the graveyards of people who have predicted the demise of Theresa May and been proved wrong.

“So I think she will succeed. Of course, Boris Johnson doesn’t agree with some of the policy decisions that she’s taken, but Theresa May has to speak not just for the 52 percent who voted for Brexit, she has to speak for 100 percent of the country and she has to find a way that builds bridges and unifies the country and that’s what I’m confident she will do.”

The Foreign Secretary became the first British minister to openly deliver a speech in Japanese.

Mr Hunt revealed he was “cautiously optimistic” the UK will strike a Brexit deal before leaving the EU.

He said: “I don’t think it’s brinkmanship. If we can’t come to an agreement, then the default is that we will leave the EU on the 29th of March.

“So that could happen. But I don’t think it’s in anyone’s interest for that to happen. So that’s why we are cautiously optimistic that we will get a deal but there is a lot of work to do to get there.”

Mr Hunt spent 18 months in Japan during his twenties, and spoke about his love for Japanese people and culture.

He said: “I have had a great love of Japan since I was a young man. I have great admiration for Japanese politeness, perfectionism and determination.”

Addressing the need North Korea sanctions, the Foreign Secretary added: “I think the lesson of the last few years is that the pressure works. The sanctions are very important.

“And so the UK and Japan and other countries have been working hard to enforce those sanctions and we stand ready to relax those when we see concrete evidence of a change from North Korea.”