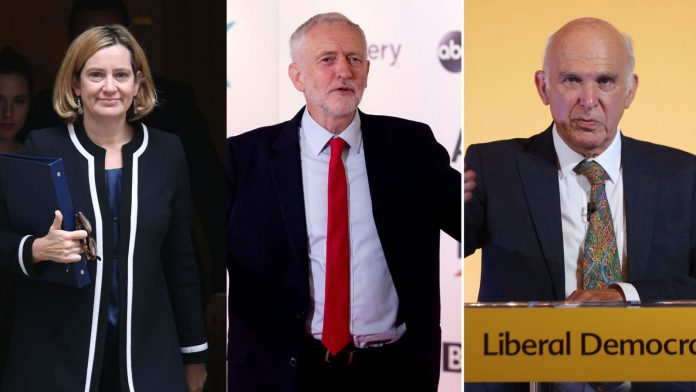 A Sky News campaign is rapidly gaining momentum over calls for an independent commission to run TV debates between party leaders ahead of general elections.

Jeremy Corbyn, Amber Rudd and Vince Cable are among those supporting the campaign to ensure voters are better informed ahead of a vote.

Since it was launched on Monday, MPs, former parliamentarians such as Sir Nick Clegg and influential groups, including the Electoral Reform Society, have signed up.

Labour leader Mr Corbyn told Sky News: “I welcome any move that will guarantee general election debates so that voters can hear directly from those putting themselves forward to lead the country.”

Other senior MPs said TV debates “energised” election campaigns and should become a “permanent fixture” instead of being arranged in “backroom deals” between politicians and broadcasters.

Under the Sky News proposals, in which we call for head-to-head debates between the leaders of the main political parties, a Leaders’ Debate Commission (LDC) would:

:: Set the format and rules of the debates

:: Ensure the objectivity of audiences

:: Steer negotiations between broadcasters and parties

But since then broadcasters and politicians have failed to agree on terms and there were no head-to-head debates between the leaders of the main parties in the 2015 or 2017 general election campaigns.

Sky News editor-at-large Adam Boulton has delivered a letter outlining the proposals to Theresa May at 10 Downing Street and Conservative sources have indicated they are considering their response.

The Sky campaign also includes a petition to parliament. After 10,000 signatures, petitions get a response from the government and after 100,000 they are considered for a Commons debate.

The first party leader to back the Sky News campaign was the Lib Dems’ Sir Vince Cable, who praised the channel’s 2010 TV election debates and said: “They energised the whole election campaign.

“It’s surely right that the ground rules should be decided in a non-political independent environment of the kind you suggest.

“We should now be putting this structure in place so there’s no argy-bargy in the few weeks before the next general election.”

Sir Nick, another former Lib Dem leader, wrote in an article for Sky News: “These debates should be an immovable part of a general election in this country and a key component of our democratic process.

Former Tory home secretary Ms Rudd, who took Theresa May’s place in a debate when the prime minister refused to attand, said: “I think the public do expect it and I think they’re entitled to it.

“I think an independent commission is the only way to go.”

Joining Ms Rudd is leading Eurosceptic Tory MP Peter Bone, who said the plan is closely aligned to one he has already tabled in a private member’s bill which is due to have its second reading in the Commons in March.

When he first tabled the bill, its sponsors included the former TV presenter Esther McVey, now in the cabinet as work and pensions secretary, and another veteran Eurosceptic Tory MP, Sir Christopher Chope.

“These debates should not be left to the political parties,” he said.

“They should be decided by an independent commission and we need to get this sorted out, not in the frenzy of a general election but before.”

Significantly, the current director of communications at 10 Downing Street, former TV executive Robbie Gibb, was editor of the BBC’s election debate during last year’s election campaign and a big supporter of such debates in his former role.

For the Scottish National Party, media spokeswoman Hannah Bardell MP welcomed the Sky News campaign, saying the party has always supported leaders debates and other parties should “catch up”.

She said the SNP would support an independent commission as long as there was “fair representation for all parties”, claiming they had been “stitched up” in the past and shut out from debates.

Former Green Party leader Caroline Lucas has also backed the campaign, saying debates should not be based on “back-room deals between politicians and broadcasters”.

Her successor, Natalie Bennett, added her support but said a leaders debate could not just be between England’s two largest parties.

James Harding, head of BBC News until last January, has also backed the campaign, telling Sky News: “The argument is not about who’s going to win, the argument is about politics and public trust.

“It’s about saying that all our politicians reach the largest number of people.”

Willie Sullivan, senior director at the Electoral Reform Society, said a leaders debate is “essential for the health of our democracy”.

“If a politician believes they are qualified to run the country, they should be willing and able to express the reasons why to the nation,” he added.

From the business world, retailer and former Dragon’s Den star Theo Paphitis has signalled his support for the campaign.

He tweeted: “The voting public deserves to hear from the politicians that could be their future PM.

“The politicians should be accountable and challenged on their policies…more so now than ever! #MakeDebatesHappen.”

Private Eye editor and satirist Ian Hislop backed the campaign, telling Sky News that politicians “should be answerable including on television which is the media where most people will see them”.

Announcing the launch of the campaign, John Ryley, head of Sky News, said: “This is all about doing what’s best for the voting public.

“Sky News, along with the other broadcasters, changed the political landscape in this country by creating the first leaders’ debates eight years ago.

“Sadly, it stands as an exception rather than the watershed it should have been.

“Political manoeuvring and failings by the broadcasters has allowed that momentum to be lost.

“Sky News believes an independent commission should set the terms for debates in future, to inform and engage the voting public with a head-to-head debate between the two political leaders battling it out for Number 10.”