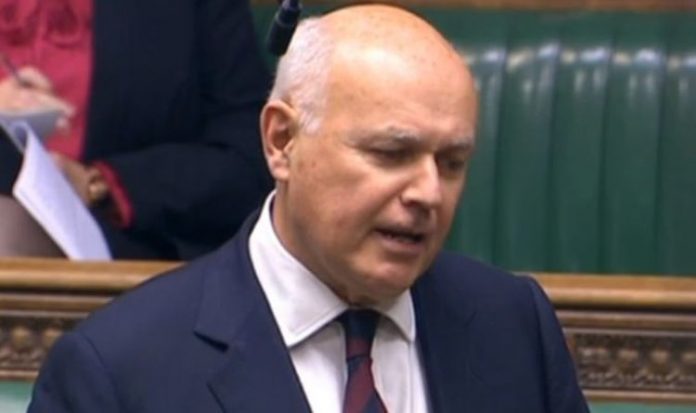 The former leader of the Conservative Party eloquently explained how an important clause of the Brexit bill passed by Parliament enables the Government to question Brussels’ interpretation of the withdrawal agreement signed by both parties. Sir Iain outlined how the state aid rule which should apply to Northern Ireland only, according to the withdrawal agreement, is now being interpreted by the EU as referring to the whole of the UK.

Addressing the Secretary of State for Northern Ireland, the Tory Brexiteer said: “I wonder if my Honourable friend recalls that in the Act that gave effect to the withdrawal agreement, it is quite clear in clause 38 that the Government did reserve to itself the right to make clarifications under the sovereignty clause.

“Now, given that is the case and given that when the protocol was signed the Government recognised that the state aid rules would apply to Northern Ireland, this extension to the rest of Great Britain is an interpretation by the European Union.

“The Government is quite within its rights to dispute that interpretation and use clause 38 to explain that they don’t agree with that and will not implement such an agreement.”

Brandon Lewis, Secreatary of State for Northern Ireland, was called to Parliament to answer an urgent question following the Government’s threat to the EU to revisit the withdrawal agreement.

Mr Lewis reassured MPs in the Commons the Government will uphold its promises on the safeguard of the peace on the border between Northern Ireland and the Republic.

She told the Commons: “At the start of a new chapter for our United Kingdom, we cannot afford to be seen as a country that cannot be trusted.

“As Margaret Thatcher said ‘Britain does not renounce treaties. Indeed to do so would damage our integrity as well as international relations’.

“Given that, how can the Government reassure future international partners that the UK can be trusted to abide by the legal obligations of the agreements it signs?”

Mr Lewis replied: “We have worked with the EU in a spirit of good faith and I know we continue to do that, both sides working in a spirit of good faith to ensure we do implement the arrangements which uphold the fundamental principles that lie behind the protocol, and of course our first priority continues to be to secure agreement on the protocol for the joint committee and the wider free trade agreement.

“But the withdrawal agreement and protocol are not like any other treaty, it was written on the assumption that subsequent agreements could be reached between us and the EU on the detail.

“That is the entire purpose of the specialised joint committee and we continue to believe that that is possible, but as a responsible Government we cannot allow businesses to not have certainty for January.”