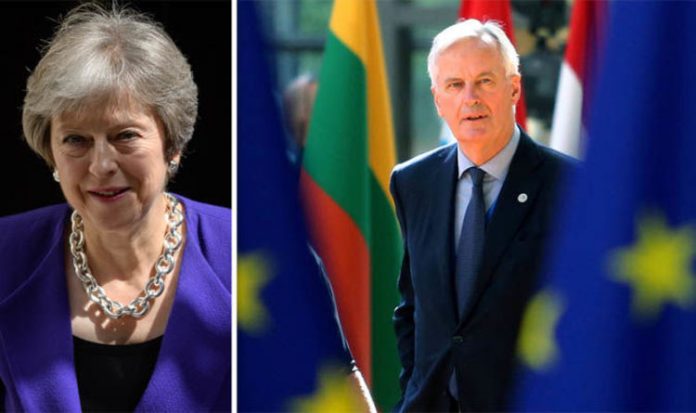 Theresa May’s Brexit proposal was agreed by the Cabinet at Chequers earlier this month and put forward on the first official Brexit White Paper last week.

However, the Brexit deal laid out has sparked massive parliamentary infighting and seen some of Mrs May’s top Cabinet members resign.

Others have said the amendments effectively kill off the whole proposal and Brussels will not accept it.

This back and forth is increasing the change of a no-deal Brexit when the UK leaves the EU on March 29, 2019.

What does no-deal Brexit mean?

Leaving without any deal would mean an immediate Brexit, without the 21-month transition period agreed upon with Brussels.

The House of Lords reported this will also meet forfeiting the £39 billion bill the UK will have to pay the EU.

The UK would then leave the single market immediately, which would result in potentially chaotic customs checks on cross-Channel freight and at airports, and hitting food and other supplies.

Even the hardest Brexiteers admit this would be a big economic impact on the UK, suggesting there UK could waive checks on EU produce, but the question remains whether the EU would do the same.

The EU would suffer, however, when it came to trade tariffs, as they import more to the UK than vice versa.

The EU would charge import tariffs averaging 2-3 percent on goods, but up to 60 per cent for some agricultural produce, damaging UK exporters.

Tariffs would lead to price inflation on goods, hitting citizens the most.

On immigration, the UK would immediately have control over its borders and freedom to set migration policy.

UK nationals would lose their right to live and work in the EU, and there would be uncertainty for UK/EU residents living in either.

Britain would be free from the European Court of Justice and all EU laws, meaning parliament would be sovereign.

However, the majority of EU laws already being actioned in the UK have now been absorbed by British law and will remain after Brexit.

The UK would quit the Common Agricultural Policy, which gives farmers and landowners £3billion in subsidies which would instantly stop.

Northern Ireland and the Brexit backstop

With Northern Ireland set to be out of the EU and the Republic of Ireland staying in, this is one of the stickiest negotiating points.

Both the UK and EU agree they don’t want a hard border, but they can’t agree on how to achieve that.

So, in case the whole thing falls apart and there’s no deal to prevent the hardening of the border, both sides have agreed on the need for a backstop plan.

However, even this is proving hard to negotiate.

Both sides agree that it needs to maintain cross-border cooperation, support the all-island economy and protect the Good Friday peace agreement.

Beyond that, the two sides are miles apart.

The EU wants a backstop that would mean Northern Ireland staying in the EU customs union, large parts of the single market and the EU VAT system.

However, a backstop that only applies to Northern Ireland would be bad for the UK as it’d create an invisible border down the Irish Sea and potentially damage the union as a whole.

Mrs May suggested a backstop that would see the entire UK remaining aligned with the EU customs union for a limited time after 2020.