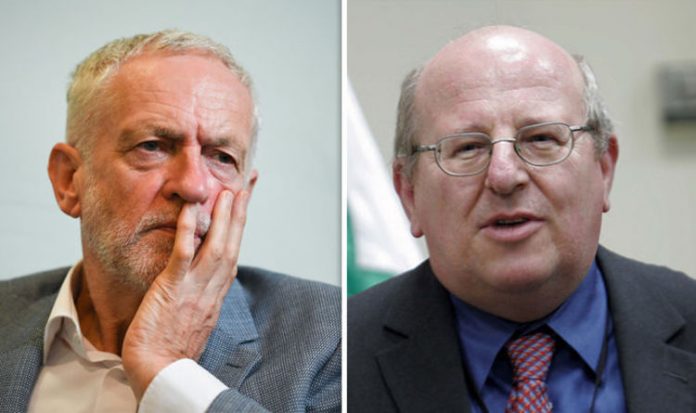 Mr Corbyn was at the centre of another controversy this week after footage emerged of him at the Palestinian Return Centre in 2013 saying British Zionists “didn’t want to study history” and had “no sense of English irony”.

According to leaked messages from a WhatsApp group seen by the Times, former chairman of the Commons foreign affairs committee, Mike Gapes, said: “I am not prepared to support the racist antisemite. Period. It’s over for me.

“All that remains is the timing of my announcement.”

Mr Gapes did not deny the claim when approached by the MailOnline and said: “I’m not making any comment.”

“One is they don’t want to study history, and secondly, having lived in this country for a very long time, probably all their lives, they don’t understand English irony either.

“They needed two lessons, which we could perhaps help them with.”

Far-right leaders came to the Labour leader’s defence with Nick Griffin posting: “Go Jezza! I wonder how many Labour activists the hysterical Zionist media campaign against Corbyn is re-pilling?”

Red-pilling is a reference to the film The Matrix in which the protagonist is offered one to reveal the true nature of reality. The term has been adopted by the alt-right to refer to people “exposing the truth”.

The Conservatives have reported Mr Corbyn to the Parliamentary standards watchdog over the video.

They claim the comments breach the code of conduct and bring Parliament into disrepute.

But Mr Corbyn said in a statement on Friday that he was defending the ambassador from what he thought were “deliberate misrepresentations”.

He said: “I described those pro-Israel activists as Zionists, in the accurate political sense and not as a euphemism for Jewish people – and that is made clear in the rest of my speech that day.

“I am now more careful with how I might use the term ‘Zionist’ because a once self-identifying political term has been increasingly hijacked by anti-Semites as code for Jews.”

Jewish Labour MP Luciana Berger said Mr Corbyn’s comments in the video were “inexcusable” and she has been made to feel “unwelcome” in her own party.

She said on Twitter: “The video released today of the leader of @UKLabour making inexcusable comments – defended by a party spokesman – makes me as a proud British Jew feel unwelcome in my own party.

“I’ve lived in Britain all my life and I don’t need any lessons in history/irony.”

But senior Labour figures have defended the Labour leader, as the Shadow Chancellor insisted Mr Corbyn had spent his entire life to securing peace in the Middle East.

John McDonnell told BBC Radio 4’s Today programme: “I think this has all been taken out of context: whatever Jeremy has said throughout the years has always been about how to secure peace, particularly within the Middle East and also peace with justice for all concerned – both members of the Jewish community and also members of the Palestinian community.

“In that context Jeremy has devoted his life, so I think this would take expressions out of context in that way are not helping.”

Mr Corbyn’s spokesman said: “A section of the speech that was edited out of the YouTube footage sets his comments in context: he very clearly does not use Zionists as shorthand for Jews.”