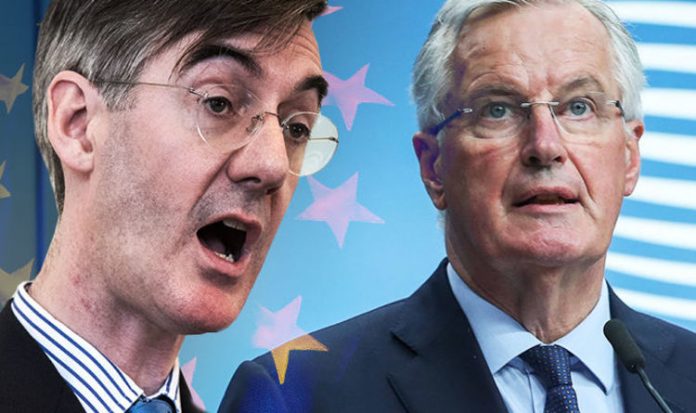 The public snub delivered at a press conference in Brussels by Mr Barnier led Brexiteers to demand that Mrs May changes direction and reinstates her red lines of no freedom of movement, no rulings from the European Court of Justice and full independence for Britain.

She has been urged to adopt an improved version of the trade deal Canada has with the EU which is supported both by Brexiteers and by many in Brussels.`

The Prime Minister’s Chequers plan was meant as a “generous offer” to the EU and, as a result, had been criticised by Leave supporters for turning Britain into a “vassal state” to the EU forcing it to accept laws from Brussels in a common rule book.

Mrs May’s determination to press for a half in half out solution led to Brexit secretary David Davis and foreign secretary Boris Johnson resigning.

Leader of the House Andrea Leadsom, a senior Brexiteer who decided not to resign over Chequers, has made it clear that there can be no further compromise with the EU.

Now Mr Barnier’s rejection means that the controversial plan does not even have the blessing of Brussels despite Mrs May’s efforts to find a workable compromise with them.

Speaking after briefing ministers from the 27 remaining EU states in Brussels, Mr Barnier made it clear that the EU would not accept the Chequers plan as a negotiating position.

He said that it would undermine the so-called four freedoms the EU is based on and its customs solution was too expensive and bureaucratic.

The Frenchman said there were elements of the plan agreed by the Cabinet earlier this month at Chequers which the European Commission did not understand, and said further discussions would be needed over the coming weeks to establish how much “common ground” exists between London and Brussels.

Mrs May’s proposal for a “facilitated customs arrangement” opened up the risk of major fraud, additional bureaucracy and damage to EU businesses, he said.

He also complained that excluding services from the common rule book gave the UK an unfair advantage.

Mr Barnier said: “Time is moving on swiftly and we don’t have much of that left.

“I think we have sufficient time to find an agreement on a Withdrawal Agreement, because we are not that far (apart).”

Mr Barnier said that Mrs May’s White Paper was “useful” for negotiations on a future relationship.

“This is a kind of offer for a global partnership which we can offer to the UK.”

Mr Barnier said that he would work with the UK over the next few weeks “to seek out where common ground exists – common ground between our guidelines and the UK ideas on future relations”.

Senior Brexiteer Tory MP Jacob Rees Mogg, the leader of the powerful European Research Group of MPs, today said that the time has now come for Mrs May to return to trying to get an improved version of the trade deal recently agreed with Canada.

The so-called Super Canada solution had been offered in March and has the backing of Brexiteers and many Remainers in the Tory party.

“It is the obvious answer which respects both sides red lines.”

He also reacted to the threats from Irish Taoiseach Leo Varadkar threatening to not allow British planes in Irish airspace in the event of no deal.

Mr Rees Mogg noted: “The aggressive comments by Messrs Varadkar and Barnier show why we are right to be leaving the mafia-like European Union.”

The popular MP for North East Somerset, who is the members’ favourite to take over as leader, has criticised Mrs May for allowing her red lines on taking back control of immigration, laws and trade to become “a pale pink”.

Senior Tory MEP David Campbell Bannerman, who is a member of the European Parliament’s trade committee, said: “The EU have made it clear that the Chequers proposal is dead in the water.

“The Prime Minister must drop these proposals and pursue a Canada plus deal – a deal which the EU has already offered. It’s Check Mate for Chequers. It is time for a Super Canada deal.”

Meanwhile, other Brexiteer MPs are furious that Mrs May has agreed to a plan by “Remainer” civil servant Olly Robbins, which they argue leaves Britain with “Brexit in name only” (Brino).

The Daily Express has learnt that at least 35 pro-Brexit Tory MPs have sent in letters asking for a vote of confidence in Mrs May’s leadership.

If the number gets to 48 then a vote will be triggered.