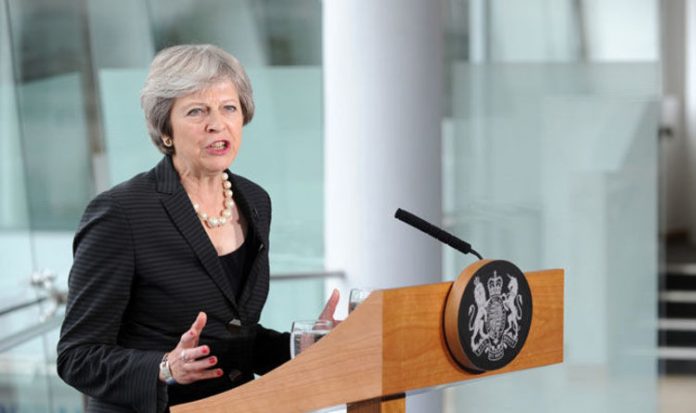 In a speech in Northern Ireland, the Prime Minister gave her toughest message yet to Brussels and said its proposal for a back stop solution for the Northern Ireland/ Ireland border is “unacceptable”.

With time running out and a so called no deal looming Mrs May showed that she was unafraid of the consequences of not being able to make an agreement with Brussels.

She warned that the European Union must “evolve” its stance on Brexit, warning that previous positions are “unworkable”.

Currently the EU wants to break up Britain and keep Northern Ireland under its control in the single market, which Mrs May has resolutely rejected.

Speaking at the Waterfront Hall in Belfast, she said that any such deal would go against the Good Friday Agreement, which brought peace to Northern Ireland 20 years ago after decades of conflict.

Mrs May said that following the publication of the Government’s white paper agreed at Chequers, it is “now for the EU to respond”.

She added: “Not simply to fall back on to previous positions which have already been proven unworkable. But to evolve their position in kind.

Mrs May restated her implacable opposition to the EU backstop, which she said would involve the creation of a customs border within the UK, which was “something I will never accept and I believe no British prime minister could ever accept”.

Equally, she said that a hard border between Northern Ireland and the Republic was “almost inconceivable”.

Twenty years after the Good Friday Agreement, the return of any form of physical checkpoints or other infrastructure would be “an alien concept”.

Mrs May said that her White Paper proposals, which would see the UK remain within the single market for goods and adopt a “common rule book” of regulations with the EU, represented a “credible third option” that would “honour the Belfast Agreement, deliver on the referendum result and be good for our economy”.

The tough stance by Mrs May clearly worried EU chief negotiator Michel Barnier who said that the “drama” needed to be removed from the Northern Ireland issue.

But he said the backstop arrangement in the final agreement would “not necessarily be ours” but insisted there must be one.

He said: “The problem in Ireland is checking goods. It is not a border but you have got to check the goods to protect consumers and protect businesses.”

He went on: “There will be a deal if there is an agreement on the backstop.

“It’s not necessarily our backstop. We can work on this, amend it, improve our backstop – the one that the Commission proposed on behalf of the Union.

“Technically we feel that it’s workable, we can improve it further, we can work on it. We are doing that work.

“But we need an operational backstop now, in the Withdrawal Agreement, and not later.”