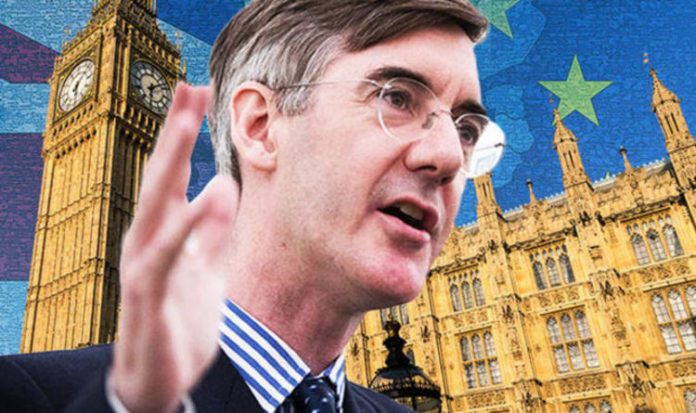 A failure to get a deal with the EU means that Britain would go on to what is known as a World Trade Deal using international rules from the World Trade Organisation (WTO).

Senior Tory MP Jacob Rees-Mogg, the chairman of the powerful pro-Brexit European Research Group (ERG), hit out at the Governor who has been facing criticism since he played a key role in George Osborne’s Project Fear campaign during the referendum.

Mr Rees-Mogg said: “Mark Carney has long been the high priest of Project Fear whose reputation for inaccurate politically motivated forecasting has damaged the reputation of the Bank of England.”

Senior Brexiteers have argued that this option is “the best option” because it will mean the UK is completely free of EU red tape and regulations and can strike trade deals around the world.

Recent evidence from Economists for Free Trade has shown that countries which trade on WTO rules with the EU do three times better than the bloc’s members while the extra tax revenue it generates will add £80 billion a year to the Exchequer.

But Mr Carney’s comments come in the latest phase of a campaign to stir up public fears about the option and force Britain into accepting a deal which would tie it to Brussels rule.

Recently there have been claims that the country would run out of insulin for diabetics and even allegations that the UK would run short on sandwiches.

Several companies have said they would leave the UK but Jaguar Land Rover was forced to admit this was not the case while reports of a mass exit from the City of London have been shown to be false.

Adding his voice Mr Carney, appearing on BBC Radio 4’s Today programme, said: “I think the possibility of a no deal is uncomfortably high at this point.”

Asked if no deal would be a disaster, Mr Carney said: “It is highly undesirable. Parties should do all things to avoid it.”

Pushed on what no deal would mean for people, Mr Carney said “disruption to trade as we know it” before adding: “As a consequence of that, a disruption to the level of economic activity, higher prices for a period of time.

“Our job at the Bank of England is to make sure those issues don’t happen in the financial system so that people will have things to worry about in a no-deal Brexit, which is still a relatively unlikely possibility but it is a possibility.

“But what we don’t want to have is people worrying about their money in the bank, whether or not they can get a loan from the bank – whether for a mortgage or for a business idea – and we have put the banks through the wringer well in advance of this to make sure they have the capital.”