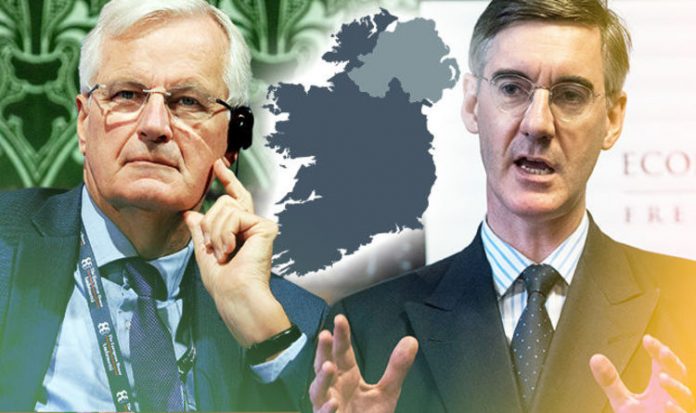 Jacob Rees-Mogg’s European Research Group is expected to unveil a detailed plan showing how the UK and the EU can avoid the need for new border infrastructure including strict customs checks for crossings between Northern Ireland and the Irish Republic after Brexit.

Customs officials could check goods bound for export to the Republic in Northern Ireland before the border, the report is expected to say.

Incidental inspections by teams of tax inspectors would have to be carried out to ensure customs regulations are being observed.

And a series of high-tech proposals to ensure customs checks can be carried out electronically with a minimum of friction will also be put forward.

The proposals are part of a series of documents being presented by the European Research Group as an alternative to the Prime Minister’s so-called “Chequers” proposals.

Speaking ahead of today’s launch in Whitehall, Mr Rees-Mogg said people could “come along and you will discover what our solution is to the Northern Ireland problem.

He said the Irish border “is the only thing that is obstructing” a free trade agreement dubbed “Canada-plus” with the EU.

He added: “It is possible to move very swiftly to a Canada-plus style deal as long as we can come up with a scheme, which I think we have got for tomorrow, on how do you ensure a solution to the Northern Ireland problem that any reasonable person would accept.”

The dispute over the Irish border has turned into one of the biggest obstacles to a free trade between the UK and the EU.

EU Exit Secretary Dominic Raab and Brussels chief negotiator Michel Barnier were reported to have had a blazing row about the issue last week.

Mr Barnier has claimed that keeping Northern Ireland in the EU’s customs union and single market is the only way of avoiding a “hard border” between the two territories.

But the Prime Minister has repeatedly insisted the province cannot be treated differently to the rest of the UK.

Eurosceptics claim the issue is being exploited by the EU and Remainers to try to thwart a clean break with Brussels.