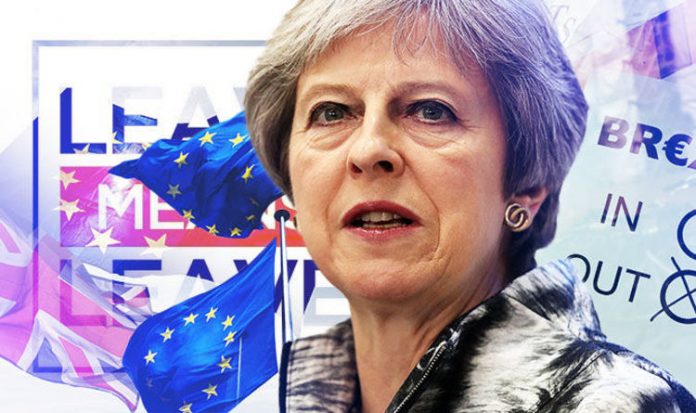 The organisation, which grew out of the Vote Leave campaign from the EU referendum, is planning a nationwide blitz to rally opposition to the Prime Minister’s plan for close custom links with Brussels.

Insiders say donations totalling hundreds of thousands of pounds have been collected in recent weeks for the group’s war chest.

And much of the cash is said to have been given by Conservative Party donors disillusioned with the Government’s position in the Brexit negotiations.

John Longworth, a former head of the British Chambers of Commerce and a co-chair of Vote Leave, said: “We’re going to relaunch our campaign to bring it to the people.”

Leave Means Leave had been set up to ensure a “clean, swift Brexit”, Mr Longworth said.


Why should we continue to support this party that is trying to sell us a pup?

Mr Longworth accused Mrs May of “heading for Brexit in name only” through her plan by her Cabinet at her Chequers country retreat last month.

The blueprint includes proposals for a “common rulebook” that will mean many EU regulations remain in place for years after the country leaves the EU. Mr Longworth said: “This is a massive fraud on the electorate which is being dressed up as the UK leaving.

“In actual fact, we’ll be a vassal state of the EU if we sign up to the Chequers deal. It is only going to get worse as we give more concessions.”

Richard Tice, a business leader and the other co-chair of Leave Means Leave, said events around the UK and a blitz on social media were being planned this autumn.

Leave Means Leave campaign is pushing for Theresa May to give a clearer break on Brexit (Image: GETTY)

“We at Leave Means Leave, like millions of people up and down the country, are truly appalled at the Chequers proposal put forward by the Prime Minister and the Government,” Mr Tice said.

“We’ve been fundraising among donors large and small and we’ve been astonished by the positive generosity of people who feel something has got to change and Chequers has got to be stopped.

“We’ve been raising significant money, hundreds of thousands of pounds and that’s growing.

“We’ve got real significant plans to take that campaign to the people so that Westminster politicians really understand the anger and the fury that’s out there on the streets.

“We cannot accept what is being proposed. It’s going to be a very busy autumn.

“It will be across the whole country. We will be taking it far and wide. We will be looking at all options. We are hiring staff.”

Mr Tice said cash was pouring in from former Tory backers concerned about the direction of Brexit.

“Some of our donors are existing medium and large donors to the Conservative Party who frankly are asking themselves questions.

“The party is mainly supported by Brexit entrepreneurs. Why are we funding a party that is denying a proper Brexit that will give huge opportunities to this country?

“Why should we continue to support this party that is trying to sell us a pup?” he said.

Mr Tice said Leave Means Leave supporters had been talking to both senior Tory and Labour MPs about backing the renewed campaign for a full Brexit.

“We’re talking to politicians of all parties – Tory MP, Labour MPs, All these Brexiteer MPs know this is a sell -out.

“Something has got to happen incredibly quickly. These MPs will welcome a campaign that is funded and is able to get stuff done.”

He added: “Its Leave means Leave because it does what it says on the tin. We mean it, unlike the Prime Minister when she says Brexit means Brexit.”

It added: “We have had a busy August so far, fundraising and recruiting more stuff, so as to relaunch our Brexit campaign.

“None of us imagined that, more than two years on from the referendum, we would have to refight the battle for Brexit.

“We never dreamt that we would have to attack some desperate ‘Chequers’ proposal from the Prime Minister, which led to the resignation of two of the most influential Brexit-supporting Cabinet ministers.

“Let’s not mince our words. The Chequers plan is a con, a sell-out, carefully planned and cleverly worded. Brexit supporters are under no illusions about what is going on.

“Brexiteers are looking for action before it is too late.

“This will be a nationwide effort, not an intellectual exercise from air-conditioned offices in London. We are taking our campaign to the people.”