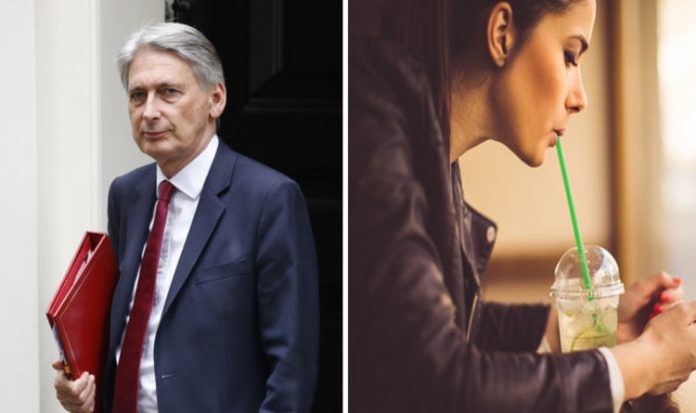 Officials are drawing up plans for a tax on single-use items from takeaway food outlets similar to the 5p surcharge on carrier bags.

Some campaigners have already dubbed it the “latte levy” because of the anticipated impact on beverages from coffee chains.

Other items that could be affected could even include crisp and sweet packets, drink bottles and food packaging.

Chancellor Philip Hammond is expected to announce the move in his autumn Budget after a Treasury consultation exercise found overwhelming public support for measures to curb plastic waste.

“We are committed to taking appropriate action through the tax system as well as through a wider Government commitment to addressing this problem,” the Chancellor said in a foreword to a Whitehall document setting out public responses to the consultation.

“We are determined to be the first generation to leave the environment in a better state than we found it.

“By tackling the scourge of plastic waste, we can secure a greener future for our country.”

The figure was the highest for any consultation carried out by the Treasury.

It follows widespread public concern about the threat of plastic waste to the world’s oceans highlighted in the BBC’s Blue Planet series.

Some even wanted such items to be outlawed altogether.

But a Treasury document insisted the Government was examining “taxes or charges on specific plastic items that are commonly used on-the-go and littered in order to encourage a reduction in production and use.”

Tax incentives are also expected to encourage more plastic recycling rather than incineration of waste or landfill, the document said.

Robert Jenrick, the Exchequer Secretary, visited a plastic pollution clean up operation on Perranporth Beach in Cornwall yesterday to highlight the moves.

He said: “Tackling the scandal of plastic pollution is one of our top priorities and we know the public is right behind us. I’ve been overwhelmed by the public support and the responses we’ve received will be invaluable as we develop our plans for using the tax system to combat this.

“Our duty to leave the environment in a better state than we found it is absolutely clear and what we’ve set out today is another important step to ensuring a cleaner, greener future for Britain.”

“This is a clear indication of the public appetite for more fiscal interventions to help reduce plastic pollution littering our environment, from inner-city streets and countryside to our oceans.”

Louise Edge, senior plastic pollution campaigner at Greenpeace, said: “Public outrage over the issue of plastic pollution has been explosive over the past year or so. It’s hardly surprising when you see the impact of plastic on wildlife and our oceans, and when it’s clear that so many companies are still pumping out throwaway plastic with no regard for the damage it causes.

“That’s why this record-breaking response to a Treasury consultation is so remarkable.

“People aren’t just getting angry, they’re getting active, and they’re demanding action from the Government.

“This is practically a people’s plastic charter calling on the Government to tax single-use plastic, incentivise recycled content, get rid of problem plastics and boost recycling rather than incineration.

“With a growing number of countries closing the door to taking our trash, we’re going to have to drastically reduce the amount of throwaway plastic ending up on the market.

“The so-called latte levy on disposable coffee cups seems inevitable now, but that should be just the tip of the iceberg. This is a public mandate to end the age of throwaway plastic.”