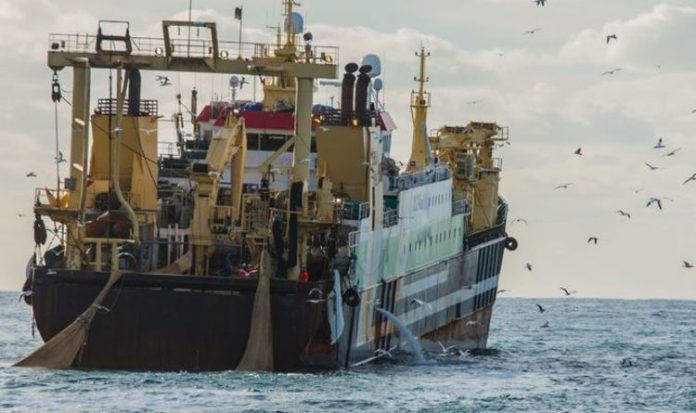 Ministers have admitted they are powerless to stop supertrawlers from fishing Britain’s waters but Tory MPs have urged the Prime Minister to reassess the UK’s policy on the matter. The Government can only legislate against the type of fishing which occurs, rather than the type of vessel which enters Britain’s waters.

Campaigner Stephen Russell has said bottom trawling was easier to legally define than the term “supertrawler” and is urging people to sign a newly-published online petition.

“I want the Government to ban bottom trawling.

“Fish stocks need to be protected, not just by fishing quotas but by protecting their habitat.

“It’s one thing to over-fish but quite another to remove their breeding grounds.

“These areas may never recover leading to sterile British waters.”

The petition, which can be found on the petition.parliament.uk website, comes after an alliance of environmental groups called on the European Union to ban bottom trawling across all marine protected areas (MPAs) amid warnings of huge gaps in the bloc’s Biodiversity Strategy 2030.

A coalition of environmental non-governmental organisations (NGOs), including BirdLife Europe, BLOOM, ClientEarth, Deep Sea Conservation Coalition and the Greenpeace European Unit, have published a paper entitled ‘Back to the Source – Saving Europe’s Biodiversity Starts in the Ocean’.

They warn “tangible and binding” actions must be taken to ensure the proposed biodiversity strategy ensures “the long-term health” of oceans throughout the EU.

The group list 10 recommended actions which it says it has sent to “decision-makers” at the EU, such as the European Commission, EU member state ministers MEPs.

‘Back to the Source – Saving Europe’s Biodiversity Starts in the Ocean’ said, under the Marine Strategy Framework Directive, EU member states have a responsibility to ensure their seas are in “good environmental status” by 2020, stating the controversial Common Fisheries Policy (CCP) is supposed to follow an “ecosystem-based approach”.

But it urged important legislation be implemented and said enforcement action by all member states “needs to be ramped up dramatically”.

One of the key ten recommended actions listed in the paper was a call for an end to what the environmental groups label as “destructive” practises, including bottom trawling in all EU MPAs.

This included “precautionary buffers for climate change when setting fishing limits; environmental impact assessments of fishing activities that include considerations such as impacts on the food web, on non-target and associated species, protected species, physical disturbance, and the ecosystem’s capacity to mitigate or adapt to climate change”.