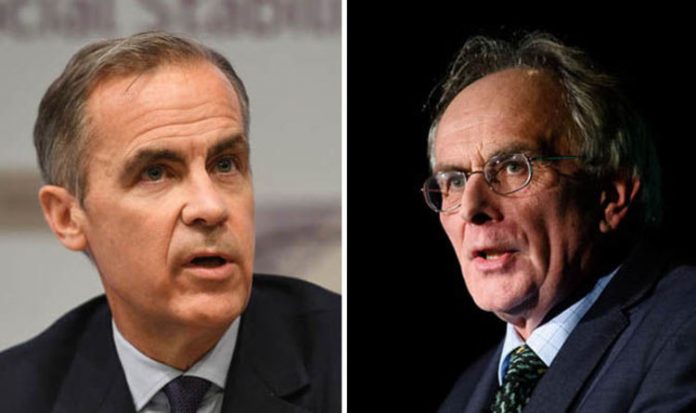 The Canadian Mr Carney, who was handpicked by Project Fear architect George Osborne, told a Cabinet briefing that house prices would drop by 35 per cent and there would be an economic crash with no deal.

But the warnings had echoes of his role in the Project Fear campaign during the referendum where he was part of the unsuccessful attempt to scare voters into backing Remain with claims that a Leave vote would see unemployment rocket, the economy collapse, house prices fall and the cost of living soar.

Instead the UK has record employment, the stock market is high and wages are rising.

“It is incredible that he is talking down the future of the country based on no evidence.

“His predictions prior to the referendum were all wrong so why on earth would people believe somebody who was wrong before?”

Mr Bone said it was a mistake by Chancellor Philip Hammond to extend Mr Carney’s stay as Governor until 2020 earlier this week.

He said: “When his predictions are so far out before the referendum why do you want to keep someone who was so wrong and clearly doesn’t believe in Brexit?

“We need somebody as Governor who believes in Brexit and can get his predictions right.”

Mr Carney briefed Theresa May and senior ministers on the Bank’s planning for a “cliff-edge” break with the EU at a special Cabinet meeting on Thursday to review the Government’s no-deal preparations.

It is understood he warned house prices could fall by up to 35 per cent over three years in a worst-case scenario, as sterling plummeted and the Bank was forced to push up interest rates.

According to reports, he compared the fall-out from such a chaotic departure to the 2008 global financial crash.