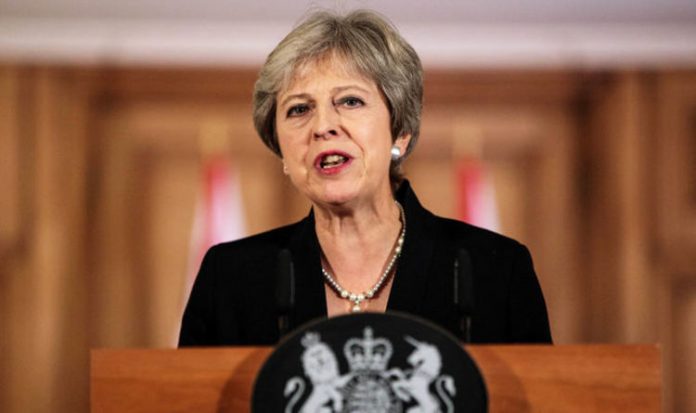 In a fiery speech aimed squarely at Brussels, the Prime Minister declared she would never agree to proposals which would see Northern Ireland cut off from the rest of the UK by remaining in the EU’s customs union and much of the single market.

And she hit out at Europe’s “unacceptable” attitude to the talks, demanding the bloc return the respect the UK has extended and attempt to reach a compromise rather than simply rejecting Britain’s offer.

Mrs May returned from a two-day summit in Salzburg yesterday where her Brexit vision, based on her so-called Chequers agreement, was dismissed by EU leaders.

But in a ferocious response this afternoon, the Prime Minister warned her European counterparts they are wrong to think the UK will cave to their demands.

Speaking at Downing Street, she said the EU has refused to budge on its position over a soliton to avoid a hard border between Northern Ireland and the Irish Republic and is offering the UK just two options.

She said: “The first option would involve the UK staying in the EEA and a customs union with the EU.

“In plain English this would mean we would still have to abide by all the EU rules.

“Uncontrolled immigration from the EU would continue and we couldn’t do trade deals we want with other countries. that would make a mockery of the referendum we had two years ago.”

The second option would see a basic free trade agreement drawn up between the UK and EU which would require customs checks at the border.

But this would also involve Northern Ireland remaining in the EU’s customs union – effectively creating a border down the Irish Sea.

“It is something I will ever agree to.

“In my judgement it is something no British PM would agree to.

“If the EU think I will, they are making a fundamental mistake.”

The Prime Minister went on to condemn European Council President Donald Tusk, who flatly rejected the UK’s proposals at the Salzburg summit.

She said: “Yesterday Donald Tusk said our proposals would undermine the single market. He didn’t explain how in any detail or make any counter-proposal. So we are at an impasse.

“Throughout this process I have treated the EU with nothing but respect. The UK expects the same. A good relationship at the end of this process depends on it.

“At this late stage in the negotiations it is not acceptable to simply reject the other side’s proposal with no counter offer.

“Until we do we cannot make progress. In the meantime we must and will continue the work for preparing for no deal.”