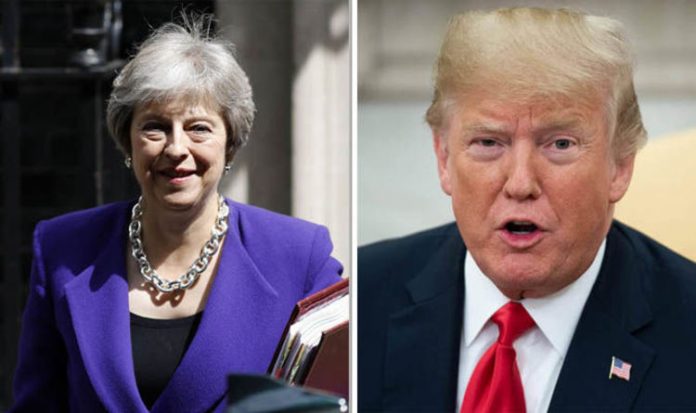 The Prime Minister has been told to take a harder towards Brussels after Mr Trump was able to get free trade promises out of Jean-Claude Juncker.

Leading Brexiteer Jacob Rees-Mogg told The Sun: “President Trump proves that it is better to stand up to the EU than to grumble. It is a useful lesson for the Government.”

European Commission President Mr Juncker was accused of signing “the most one-sided deal in history” during his White House visit by ex-Europe minister Bruno Macaes.

During the visit Europe pledged to buy billions of exports from the US for a stay of execution on car tariffs.

Ex-Tory leader Iain Duncan Smith said: “What Mr Trump demonstrates is a lesson for Britain’s so-called negotiators – don’t try figure out what it is the other side will accept, but tell the other side what you want.

Mr Smith added the UK needs to go to Brussels and demand what we want.

He said: “Look what happened, after all the bombast and bluster – the EU went scurrying over to Washington and have backed down.”

“What I would say to our team is stop having a go at your own country, and go over to Brussels and say this is what we want, and if you don’t like it we will make other provisions.”

Former Ukip leader Nigel Farage said these negotiations showed that that the EU can only respect “brute force”.

He said: “Trump has achieved more in one day of trade negotiations with the EU than May has in two years. If only we had a leader, not an appeaser.

“If I have learned one thing from nearly 20 years in Brussels, it is that the bully boys of the EU Commission only respect one thing – brute force.

“The truth of it is, the protectionist EU has now been forced by Trump into taking an approach that is more towards free trade and fair trade.”

The EU will buy US soybeans and natural gas from the US with levies on steel and aluminium imports to remain in place in the wake of the visit.

An unnamed official said the EU sided with Mr Trump over the recent imposed tariffs on Chinese imports, and agreed to cooperate with the US to end Beijing’s unfair trade practices.

The official told Reuters: ”They want to work together with us on China and they want to help us reform the WTO (World Trade Organization).”

”The EU came into the conversation and they were open to the proposals we had made about getting rid of tariffs, non-tariff barriers and subsidies.”

After crunch talks with the European Commission President, Mr Trump said both sides had agreed to “work together towards zero tariffs”.

And he announced the EU had agreed to ease restrictions on American exports of liquefied natural gas and soybeans to Europe.

Meanwhile, Mr Juncker also claimed victory, saying a pledge by the US to hold off on tariffs against cars built in the EU was a “major concession”.