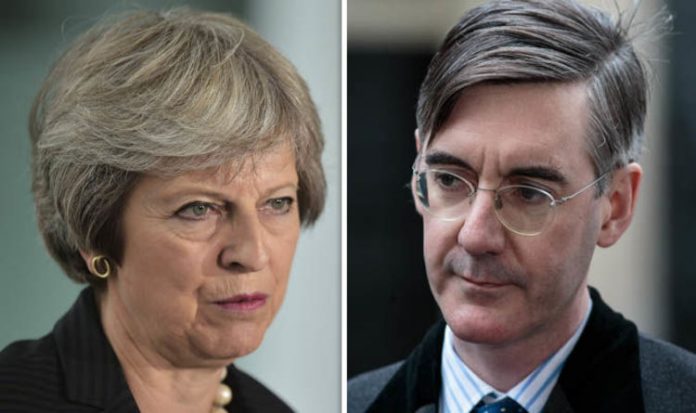 Speaking exclusively to Express.co.uk, UKIP MEP Tim Aker lambasted the Prime Minister for her ‘soft’ Brexit White Paper, and called on the Government to further liberate the UK from EU regulations.

Commenting on accusations that Theresa May “capitulated” on her Chequers Brexit plan, Mr Aker said: “The more Theresa May capitulates on her disastrous Chequers arrangement the better.

“I honestly don’t know what’s worse, what she is proposing now or the nonsense David Cameron came back with after his ‘negotiations’ with the European Union.

“Theresa May loves a U-turn, the more U-turns we see on the Chequers arrangement, the more likely we are to see the Brexit people voted for.”

The EU lawmaker took direct aim at the Prime Minister and the European Research Group (ERG), stating that what they are proposing is “not Brexit”.

He criticised their proposal for merely “getting rid of our representation in the EU”, rather than achieving any substantive new powers and freedom for the UK.

He said: “The British people voted for much more than that, there was a vision put out during the referendum of change and Britain being able to determine its future, so far what we have seen is not good enough.”

Mr Aker instead called on the ERG, led by chief Brexiteer Jacob Rees-Mogg, to put more pressure on the Prime Minister to “make Brexit mean Brexit”.

He accused the Conservative Party of waiting nearly two years to act when it obvious “she wasn’t going to deliver the Brexit 17.4 million people voted for”.

Attacking the Prime Minister directly, he said: “With her pathetic attempt to end Parliament early and run away from her problems, Brexit MPs should be doing everything they can to rebel now and push for substantially more changes.”

The leading Brexiteer MEP has stated the amendments tabled by the ERG and accepted by the Government do not go far enough.

He called for the Government to guarantee that the UK will be able to set up its own trade deals with other nations around the world from March 2019.

He said: “Let’s strike the deals with America, Australia, New Zealand, Asia and as far and wide as possible.”

The EU lawmaker also welcomed the key amendment added to the Customs Bill which stipulates the UK will stop collecting tariffs for EU nations at the border following Brexit unless there is reciprocal arrangement.

He said: “If the EU is going to demand tariffs on our goods then it is only right that the Government puts equal tariffs on the EU.

“Then we can use the money to refund all businesses having to pay the tariffs in the first place.

“It will also allow us to have a strong hand to be able to negotiate the removal of these tariffs in the long run if we are applying them to the EU as well.”

The Prime Minister faced a series of tense House of Commons votes on the Brexit Customs Bill this week, which were nearly defeated by rebel Tory MPs.

Mrs May was forced to accept a raft of amendments to her bill in order to avoid another shocking defeat in Parliament, raising criticism that she had buckled to Brexiteer demands and capitulated on her ‘soft’ compromise deal reached at Chequers.