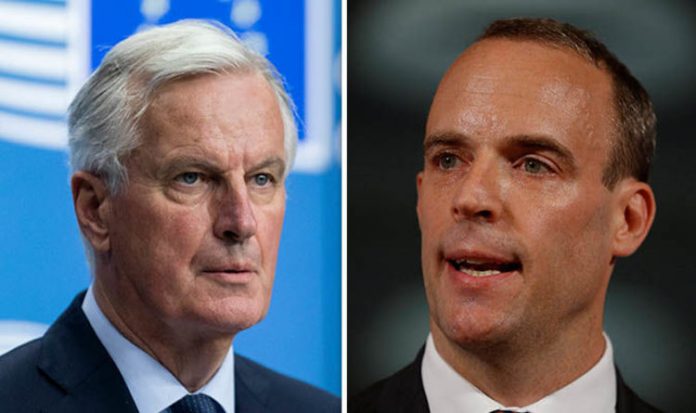 A poll of over 3,000 people conducted by KPMG found that 70 percent of interviewees believe prices will rise in the event of ‘no deal’ outcome.

The research also revealed that 45 percent of responders think ‘no deal’ is bad for the country, in comparison to only 25 percent who consider it to be beneficial.

She said: “This is all part of Project Fear part two, which I have been repeatedly warning about for the past few weeks.

“We are firmly into phase two of scaremongering.”

The European lawmaker accused the Government of “caving in to the bully boy tactics of the EU” and failing to get behind Brexit and “fight for the country”.

The findings come as the Government published its first batch of 24 technical notices, detailing how Whitehall intends to mitigate against disruption caused by a potential ‘no deal’ outcome.

Speaking in Westminster, he said: “So, while we are striving for the best outcome and a good deal from these negotiations, we stand ready to deliver Brexit for the British people if there is no deal.”

He added a ‘no deal’ outcome would give the UK the “unfettered ability to lower tariffs and to bring into effect new free trade deals that we can negotiate straight away”.

Remainers have nevertheless expressed concern surrounding the possibility of a ‘no deal’ outcome, with Scottish First Minister Nicola Sturgeon branding it an “unmitigated disaster”.

She said: “A ‘no deal’ Brexit would be an unmitigated disaster, and the fact the UK Government is even talking about it is evidence of their abject failure.

“That they once had the nerve to tell us that independence threatened our place in Europe adds insult to injury. Scotland deserves better.”

Ms Parker hit back at the growing concerns from Brexit critics, stating the UK would not be “worse off” if we were to leave the EU without a deal.

She said: “There is no evidence to suggest we would be worse off under a ‘no deal’.

“It would certainly be better than a poor deal, which the EU seems intent on giving us by waving its big stick at every turn.

“When sections of the media use words like ‘crash out’, it’s nonsense.”

She added the UK could trade with EU member states under WTO rules as it does with other nations, but accused Theresa May of being “unable, or unwilling” to deliver on the will of the Brexit voter.

In a stinging conclusion, she said: “What we should take from it is that the EU can threaten all it likes, the blitz spirit of the Brits is still in our DNA and we will not be bullied.”