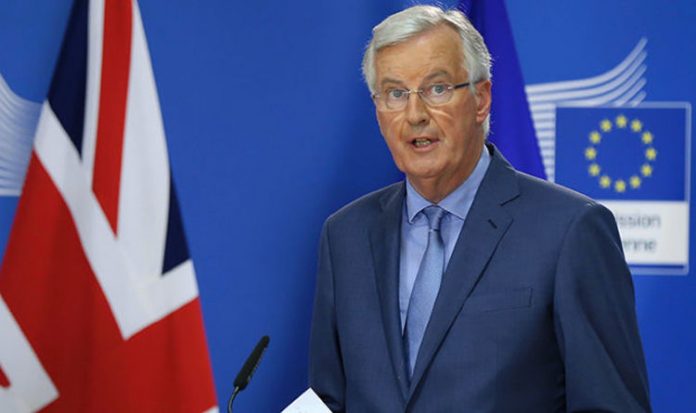 Fears of a return to violence have been raised if the Good Friday Agreement is damaged by the imposition of a hard border on the island of Ireland after Brexit.

Brussels had suggested a solution to the problem – a common regulatory area for goods and customs with the rest of the EU.

But this has so far been rejected by the UK as “annexing” Northern Ireland.

However in a major breakthrough for Britain, Mr Barnier described the issue as “the biggest risk” caused by Brexit and said he was “ready to improve” the EU’s proposal.

He said: “Since we will not know what the future relationship will bring by autumn 2018, we need to have a backstop solution in the withdrawal agreement.

“The UK agrees with this, and both the EU and the UK have said that a better solution in the future relationship could replace the backstop.

“What the EU has proposed is that Northern Ireland remains in a common regulatory area for goods and customs with the rest of the EU.

Michel Barnier was also positive about reaching a deal “unprecedented in scope and depth” around free trade.

He warned that UK proposals must not “undermine” the four pillars of the single market – free movement of goods, capital, services and labour, which he called “one of the EU’s biggest achievements” – by seeking freedom only for goods.

“But I remain confident that the negotiations can reach a good outcome.”

“It is possible to respect EU principles and create a new and ambitious partnership.”

Mr Barnier has previously said he does not want to “dramatise” the backstop solutions.

The EU’s negotiator said: “Let me be clear – we are not asking for any border between Northern Ireland and any other part of the UK.

“We must de-dramatise the backstop.”

The thorny issues of the Irish backstop has been at the heart of the Brexit negotiations.

Prime Minister Theresa May would need would prevent a hard border between Northern Ireland and the Republic of Ireland.

But the UK is opposed to a backstop, which would create a customs border in the Irish Sea.

It comes after Sinn Fein leader Mary Lou McDonald leader declared a referendum to decide whether Northern Ireland should split from the UK before Brexit must be held “as soon as possible”,

In a shock U-turn on the party’s policy on an independence, she reversed her position and insisted a vote should be held sooner rather than later – despite the ongoing Brexit talks.

Mrs McDonald acknowledged a vote during the negotiations “does not provide the best environment for a referendum on Irish Unity”.

But she added “Sinn Fein wants to see a referendum as soon as possible”, the Belfast Telegraph reports.