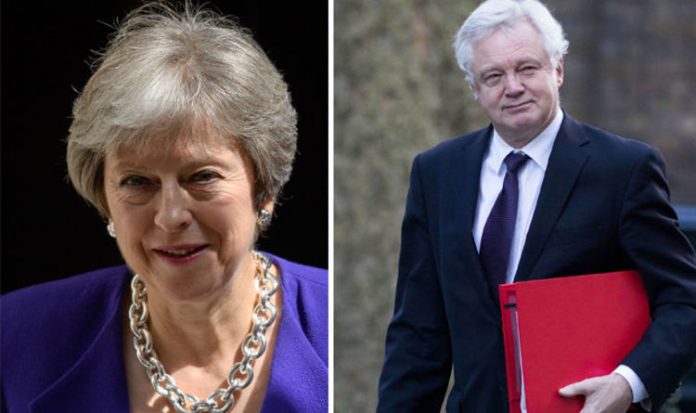 Hard Brexit preparations will step up from next month, with the release of 70 advisory technical notices to businesses and individuals.

The admission of the Government’s no-deal plans is likely to be music to the ears of some hard-line Brexiteers.

Until now, the Cabinet has been keeping quiet on any no-deal contingencies, through fear of companies heading overseas.

The Prime Minister told the Commons Liaison Committee that the Government is “working for a deal, a good deal”.

She told the group of MPs ministers are “stepping up” their plans for a hard Brexit.

She said: “Cabinet agreed we need to step up our no deal negotiations.

“The technical notices is part of that.”

In addition to UK businesses, plans are also being made overseas, as Mrs May revealed transport agencies are negotiating aviation plans with other countries to keep air traffic moving in the event of a no deal.

The revelations come as the Prime Minister faces increasing pressure from Brexiteers to drop elements of the Chequers deal deemed by many as a soft Brexit approach.

At Prime Minister’s Questions on Wednesday, hardline Brexiteer Andrea Jenkyn challenged the PM and asked her: “At what point was it decided that Brexit means Remain?”

Mrs May responded: “At absolutely no point, because Brexit continues to mean Brexit.”

Department for Exiting the EU Minister Steve Baker was one of the departees and warned the Prime Minister to step up no deal planning to indicate she was serious to Brussels.

“The EU need to be in no doubt that we are making those preparations and ensuring that, should that be the outcome, we are prepared.”

The Prime Minister has narrowly survived a number of votes on her proposed Brexit deal this week.

A group of Tory Remainer rebels, including Dominic Grieve, Nicky Morgan and Anna Soubry, have consistently voted against the Government, and in favour of a softer Brexit approach.