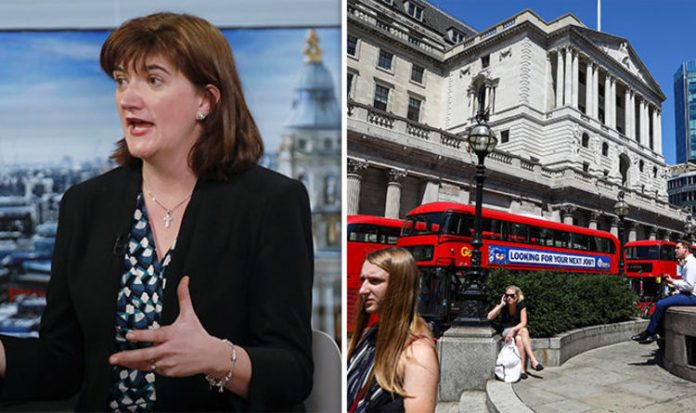 The Governor of the Bank of England Mark Carney is being encouraged to draw up his own Brexit impact analysis before the Commons goes to a vote on Theresa May’s exit deal later in the year.

Nicky Morgan, chair of the Treasury Committee, said Parliament’s vote on the final deal needs to be “meaningful.”

The MP for Loughborough said: “Parliament’s vote on the withdrawal agreement and future relationship can only be meaningful if it is properly informed.”

Mr Carney is an ardent Remainer, having urged the UK to vote to stay in the EU in 2016.

Just six weeks ago he claimed that the average UK family is £900 worse off since we voted to quit the Brussels bloc two years ago.

Speaking to the Treasury Committee in May, Mr Carney said: “Real household incomes are about £900 per household lower than we forecast in May of 2016, which is a lot of money.”

Before the deal is put before the House, the Bank are expected to issue their predictions for Brexit’s impact on the stability of Britain’s finances.

The Financial Conduct Authority has also been asked to give their verdict on any possible problems for consumers.

But the Treasury Committee has confirmed it will ask for “high-quality analyses” in the coming months.

Ms Morgan added: “In the months ahead, the committee will press for robust and high-quality analysis on the consequences of Brexit for the economy and the public finances so that parliament’s decisions can be based on the best possible evidence.”

Ms Morgan has already asked the Bank of England and the Financial Conduct Authority to give their analyses “in good time” for the vote on the deal expected in the autumn.

She also said that the Committee would “write again to set out its expectation” if Theresa May returns from Brussels with ‘no deal’.

Despite fear-mongering, Theresa May has vowed that she will not be distracted by gloomy forecasts about Britain’s post-Brexit economy.

In February the Prime Minister said: “The British people want us to leave the European Union and that is what we will be doing.”