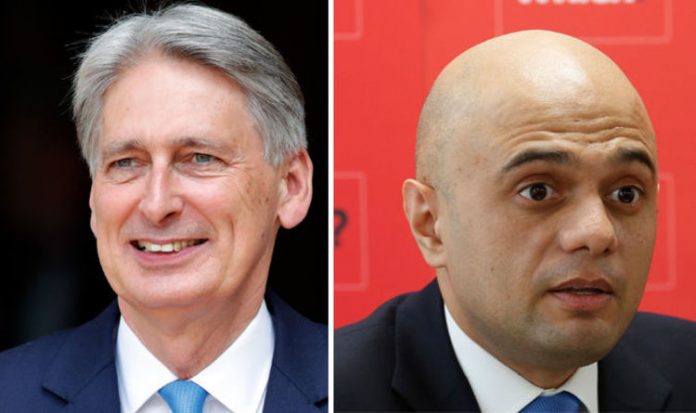 Home Secretary Sajid Javid, and Chancellor of the Exchequer, Philip Hammond, are at loggerheads over a key component of the Prime Minister’s Brexit Chequers plans, according to the Telegraph.

Mr Hammond has been accused of suggesting borders should be up for negotiations with Brussels.

Notes from the Cabinet meeting at Theresa May’s country retreat two weeks ago apparently show the Chancellor said he “disagreed with the Home Secretary on labour mobility and ending free movement”.

He said flexibility in freedom of movement would help the relationship between the UK and EU powerhouse, Germany.

The Chancellor suggested: “If the UK sought her help to deliver this deal, it would need to be prepared to negotiate on this point.”

He added that preferential immigration rules could be “very important for the Chancellor of Germany”.

The Home Secretary reportedly agreed with the Prime Minister’s plans and said freedom of movement “has to end”.

He added there can be “no back door”.

Mr Hammond, who campaigned for Remain in 2016, added the Government should “keep options open” when it comes to free movement and the idea of “preferential mobility arrangements”.

A source close to the minister has tried to downplay the comments and said the Chancellor “categorically” agrees with ending free movement but disagrees with the Home Secretary on “mobility arrangements as part of free trade deals”.

The source said: “The minutes do not accurately reflect Mr Hammond’s position on free movement.”

Theresa May is facing increasing pressure to rule out any further flexibility with EU negotiations.

Commons Leader and ardent Brexiteer Andrea Leadsom has warned the Chequers plan should be the “final offer”, rather than one up for discussion.

However Mrs May has not ruled out further concessions to the deal.

When questioned on Mrs Leadsom’s comments, a spokesman for the Prime Minister said: “The proposals that we put forward in the White Paper are what we believe to be the only credible and realistic way to move the negotiations forward and that was made clear numerous times by the PM.”

Jeremy Hunt has also refused to call the White Paper the “final offer”.