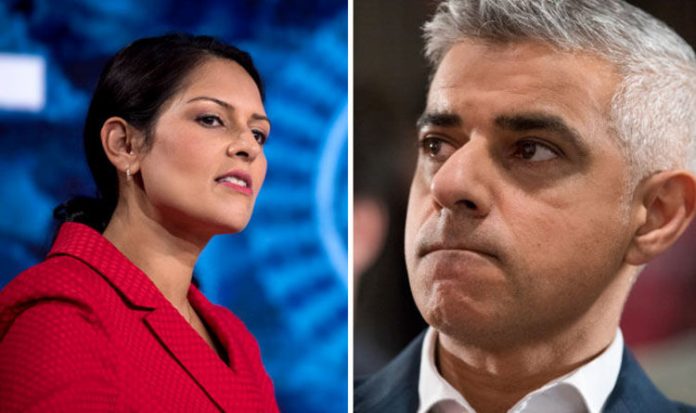 Ms Patel demanded Mrs May to take matters into her own hands, and seek a “level competitive playing field” as well as “market access” recognised by countries all over the world, in order to take back control of Britain.

And the former Cabinet minister also laid into Mr Khan for “talking down the country”.

Speaking to City AM, she said: “The Government must believe in Britain and our prospects as we seek a level competitive playing field and market access for our strong services sector with mutual recognition.

“Not being run by remote control by Brussels and with no EU rulebook, Britain can have an economic plan based on prosperity and opportunity with full trade freedom, which will show the world how open markets and pro-competitive regulation is the route to economic freedom and success.”

Ms Patel insisted that Whitehall must deliver Brexit according to the people’s vote, to take back control of the country’s finances, laws and money, and that any association with EU laws would inevitably defy the historic referendum vote.

She said: “The British public voted to take back control of our laws, borders and money and any attempt to keep Britain bound to EU rules and controls would defy the democratic will of the people.

“That means leaving the Single Market and the customs union. As well as ignoring democracy, the doom-mongers re-running Project Fear are talking down our country, economy, businesses and people.”

The UK would secure viable trade deals with other countries, according to the Tory MP, which will inevitably boost Britain’s economy to greater heights, creating new growth opportunities away from the EU whose “economic power is in decline”.

Ms Patel added: “Leaving the EU gives our country a fresh start and an opportunity for national renewal.

“Outside of the controls of the EU, SM and CU we can pursue new trade deals with fast-growing economies across the globe rather than be bound to the EU whose economic power is in decline.”

Her comments come as London Mayor, Sadiq Khan, hit out at Mrs May’s White Paper, declaring it as “complex, untested and expensive” for Britain as well as failing to meet the needs of UK’s leading sectors.

He insisted Brexit would cause serious economic harm to Britain, but Ms Patel lashed out at his statement, and said “doom-mongers re-running Project Fear are talking down our country, economy, businesses and people”.

Mr Khan told City AM: “So the government’s current plans for Brexit would cause huge economic harm not only here in London, but up and down the country. Increasing the UK’s international trade around the world in services is difficult to accomplish.

“Barriers relating to regulation, the recognition of qualifications and the movement of workers from one country to another are hard to break down.

“The Single Market, however, eliminates these barriers for much of UK services’ exports across Europe – a huge advantage for our services-orientated economy.

“While the UK has a large trade deficit with the EU in goods, by contrast we presently enjoy a £28bn surplus in services.”