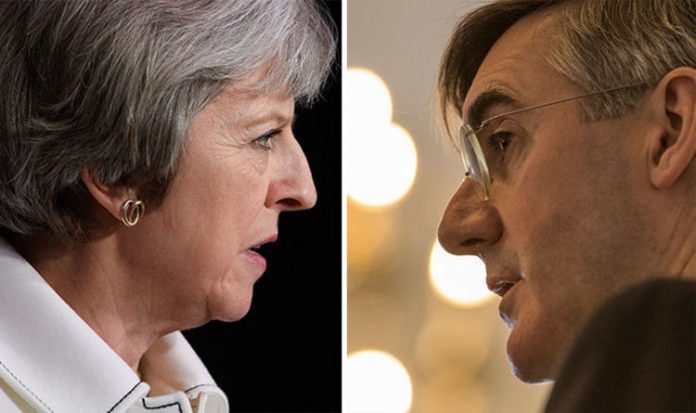 Mr Rees-Jogg, who as chairman of the influential European Reform Group is arguably the most influential Tory non-minister in the House of Commons, has predicted that other Conservative MPs are likely to follow his lead.

As well as Brexit Secretary Mr Davis, Steve Baker and Suella Braverman, both junior ministers in the Department of Exiting the European Union (DExEu), are also believed to have quit their posts.

Mr Rees-Mogg was quoted by Sky News as saying: “This is very important. It raises the most serious questions about the PM’s ideas.”

Comparing her deal to an egg so softly boiled that it “isn’t boiled at all”, he added: “A very soft Brexit means that we haven’t left, we are simply a rule-taker.”

Writing in the Daily Telegraph he said: “If the proposals are as they currently appear, I will vote against them and others may well do the same.’

The Chequers deal was “the ultimate statement of managing decline”, he claimed, adding: “It focuses on avoiding risk, not on the world of opportunity outside the EU.

“Pragmatism has come to mean defeatism.

“We seek a new and equal partnership. not partial membership of the European Union, or anything that leaves us half in, half out. We do not seek to hold on to bits of membership as we leave.

“Tying the UK to transcribing the EU rule book to the letter rather than agreeing shared results will leave large barriers to trade with the rest of the world.

“There is unhelpful ambiguity in the text which could lead to results that are the opposite of those implied by the briefings that have been given.

“For example, the conclusion boasts that free movement will end, whereas in fact the agreement could be used to open it up again.

“It proposes “a mobility framework so that UK and EU citizens can continue to travel to each other’s territories and apply for study and work”.

“The same unclear construction applies to the ending of ‘vast annual payments to the EU budget’.

“As Norway and Switzerland pay for preferential access, does this mean simply ‘large’ payments but not vast ones?

“If the Brexit Secretary cannot support them they cannot be very good proposals.

“It was an attempt to bounce the cabinet. It was a serious mistake.”

Hardline Brexiteer Mr Rees-Mogg has issued previous warnings about a soft Brexit, and warned Mrs May prior to the Chequers meeting she must deliver the Brexit she promised or risk collapsing the government.

His words triggered a backlash from some fellow Tory MPs, with Alan Duncan branded his comments “insolent”.

However, this is the first time he has openly threatened to defy Mrs May by voting against her plans in Parliament.