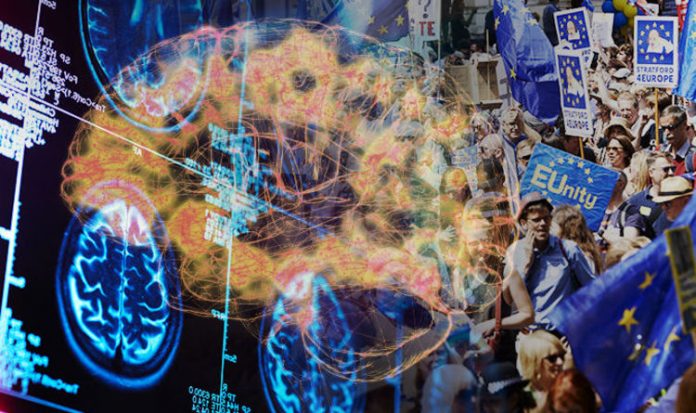 The condition, dubbed Brexit Anxiety Disorder, causes the pro-European middle classes to behave irrationally – so much so, those who fit the profile have been labelled ‘Remainiacs’ by professionals.

Psychologists say these Remainiacs are acting no different than those suffering from chronic anxiety caused by complete loss of control and insecurity.

Dr. Philip Corr, professor of psychology and behavioural economics at the University of London, and Dr. Simon Stuart, a clinical psychologist, say these so-called Remainiacs can be spotted a mile off.

They are, the pair say, prone to anger, despair and rumination and slip into polarised “in” and “out” groups to seek demonisation of Brexiteers.

While it simply is not possible to give the 48 percent who voted to remain in the bloc a full psychological profile in terms of their reaction to Brexit, Drs Corr and Stuart say many extreme Remain campaigners share a common psychological thread that centres around a loss of identity, power and certainty.

According to the research, Brexit is something Remainiacs blame heavily on the working class, who are over-represented in Leave voters.

Drs Corr and Stuart believe this emotional response is “standard psychological stuff” from people looking to find solace in group thinking by attacking their social “inferiors” – or Brexiteers – as stupid, racist or easily misled.

Dr Corr said: “On both sides of the debate, there is evidence of considerable ‘in-group’ love and ‘out-group’ hate.

“This is only to be expected given the social psychological dynamics of the debate.”

An example is the pro-EU hashtag #FBPE, meaning “follow back, pro EU” and used avidly by Remainers to highlight their opposition to Brexit and call on others to follow their lead.

Dr Stuart says those suffering from Brexit Anxiety Disorder should return to “normal” behaviour if Prime Minister Theresa May scoops a deal with the EU.

He said: “Those suffering anxiety might return to more normal, rational behaviour if the context around them changes.”