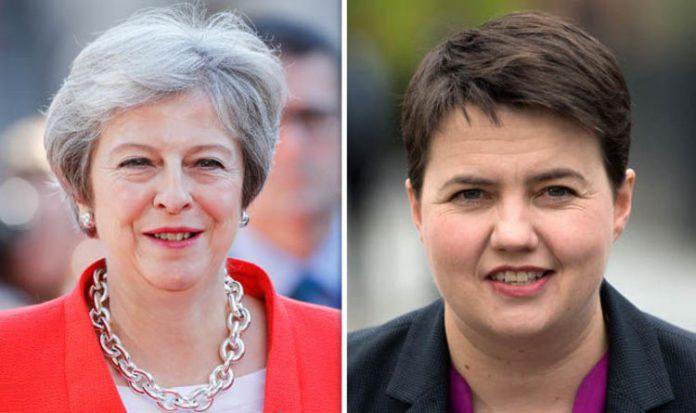 She accused certain Tory politicians of putting their career aspirations before the interests of the country, in the wake of ongoing criticism of Mrs May’s Chequers proposal.

Speaking at an event organised by The Times, she said: “I would really quite like some of my colleagues in Westminster to shut up for a bit.

“Put their sharp elbows and their personal ambition away and just let the Prime Minister do her job and go into bat for the country and bring home a deal.

“That’s what I wish more than anything for the next few weeks and months, genuinely.”

She admitted it is “absolutely right” for people to have their say on the sort of Brexit they want, but warned that the negotiations are “right down to crunch time”.

Pointing to the imminent Brexit deadline in March 2019, she said: “We’re talking weeks not months.”

The Scottish politician noted the UK are sending Mrs May to negotiate with the EU27 leaders, and “asking her to bring something back for the country”.

In a direct attack on Brexiteer MPs who have voiced criticism of Mrs May’s plans, she said: “I don’t care what you want your next job to be.

“Your job now is to get behind and let her deliver for the country.

“Let the woman do her job.”

Notably, European Council President Donald Tusk said the “suggested framework for economic cooperation will not work”, and noted that October will be a “moment of truth” for reaching a deal.

Commenting on the events in Salzburg, Ms Davidson said: “Today she has had a setback.

“But she will get up tomorrow morning and she will keep going, and I think the reserves that she has – she never talks about being type 1 diabetic, she never talks about now being over 60 or any of that sort of stuff – but the resilience she is showing under the most extreme pressure, we haven’t seen in politics since the financial crash of 2008 and before then for a couple of decades before that.

“It is genuinely remarkable and astonishing.

“It is in everybody’s interests, the United Kingdom’s and the EU’s, to make sure there is a deal.

“I still believe there is political will on both sides.”