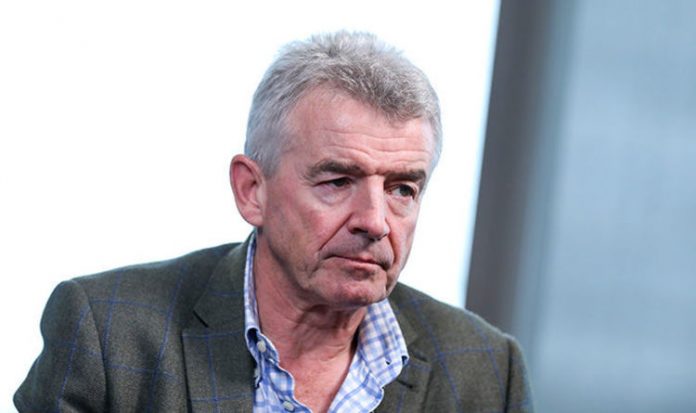 The businessman, a prominent opponent of the decision to quit the EU, said EU negotiator Michel Barnier’s backstop plan for the Irish border was “undeliverable”.

Mr O’Leary warned a no-deal scenario would necessitate the cancellation of flights a month in advance of next March’s withdrawal, adding: “We are selling tickets between the UK and Europe on flights that may not take place.”

Ireland believes last December’s agreement in principle between the UK and EU will keep Northern Ireland within the EU’s regulatory arrangements if negotiations fail.

Mr O’Leary said he still believed a deal would be done eventually – but reiterated that there was a real danger of no-deal by omission.

In comments which focused on Britain’s role in the negotiations, rather than Ireland’s, he highlighted risk factors including Theresa May being replaced as Prime Minister, and the calling of a general election.

Mr O’Leary said: “There is a rising risk, if the deal is not done by about November then, frankly, it will not get done at all.

“Doing a deal is going to be very difficult.”

Mr O’Leary condemned plans future arrangements for the Irish border as he claimed Britain cannot deliver what has been proposed unless there is a border down the Irish Sea.

He said: “The backstop agreement is undeliverable.

“There is no way you can deliver a frictionless border if you are leaving a common market – it is not deliverable.

“There are going to be real and serious consequences, both in the UK economy and in the European economy.

“From my narrow perspective all I want to see is a continuation of open skies and free flights, cheap flights.”

Mr O’Leary was speaking at the low-cost airline’s annual general meeting on the same day leaders from across Europe gathered for an informal summit in Salzburg, at which Prime Minister Theresa May has been trying to “sell” her Chequers White Paper setting out her vision for the UK’s future trading relationship with the bloc.

He also addressed other challenges facing for the airline – including costs.

Mr O’Leary said: “Oil is still going to be the most significant cost for every airline, but I would like to see oil prices go higher this winter because I think it would speed up the inevitable bankruptcy of a number of other European airlines.

“It would create more opportunity for us to grow.”

At the meeting, almost 30 percent of Ryanair’s shareholders voted against Ryanair chairman David Bonderman’s re-election after an unsettled year at the low-cost carrier marked by pilot strikes which have grounded hundreds of flights.

Mr Bonderman’s re-election was secured by a reduced 70.5 percent share of the vote.