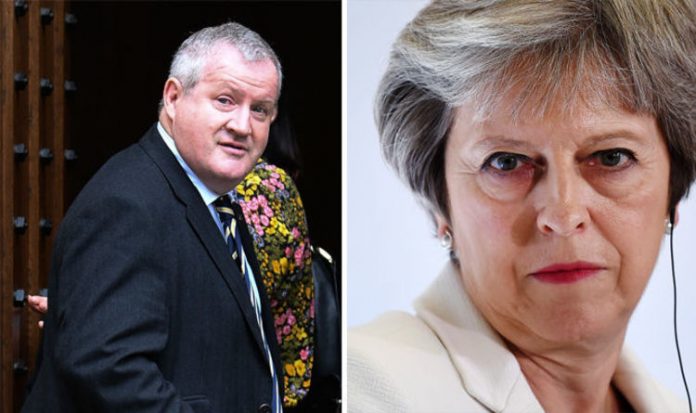 The SNP are willing to fight a Westminster election to keep close bonds with the Brussels bloc.

This would mean keeping the UK in the single market and the customs union, which they claim are important for Scotland.

Westminster leader Ian Blackford said: “It’s about making sure that we stay in the single market and the customs union.

“If we faced an election as we go through that process, then so be it.

“I believe the SNP would come out of that in a strengthened position.”

The agreement reached during a meeting of Cabinet members at Chequers on Friday fails to cut trade links with the EU by creating a “combined customs territory”.

But Theresa May said neither side will have “current levels of access” to each other’s markets.

Mr Blackford claimed the soft Brexit approach of close trading ties with Brussels would “protect” the interests of Scottish people.

He added: “If we’re talking about a situation where the Scottish economy is going to be threatened and if there’s an opportunity for us to have a debate with the people of Scotland, then of course I would welcome that.

“My focus in the short term, my party’s focus, is about protecting the interests of Scottish people.”

The MP believes the SNP could storm another General Election, despite losing 21 seats in 2017.

“We’ve been the governing party in Scotland for the last eleven years.

“I would firmly believe that if we have to put ourselves in front of the electorate again, we’d get the overwhelming backing of the people of Scotland.”

Last month, the SNP stormed out of Parliament during a Brexit debate after Mr Blackford was kicked out by Speaker John Bercow.

The MP for Ross, Skye and Lochaber repeatedly stood up and asked for Parliament to sit in private, declaring “Scotland will not be disrespected by this Parliament!”

Party leader Nicola Sturgeon claimed Scotland and Holyrood were “being treated with contempt by Westminster – and it needs to be highlighted”.