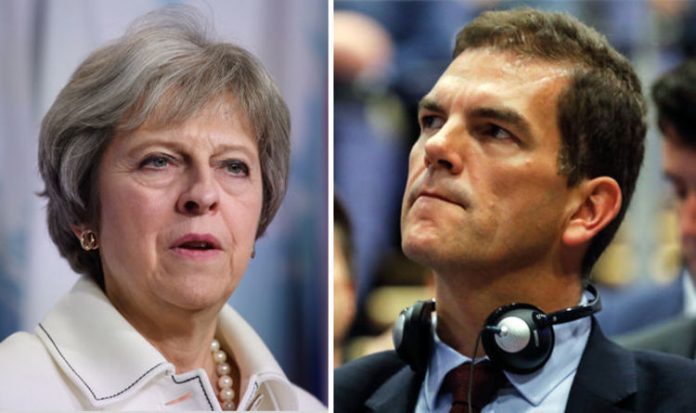 In one of several furious tweets posted on his official Twitter page last night, the former MP accused Mr Robbins of blocking Mr Davis’ own Brexit proposals earlier this year.

He said: “Robbins et al blocked the publication of the White Paper from at least March because 1) they’d lose policy control and 2) Ipso facto it’s [sic] contents might not be the Hotel California Brexit they delivered at Chequers.”

Mr Jackson also launched into a salvo at the Prime Minister’s director of communications Robbie Gibb, who he blamed for last week’s Today programme report that a new “third way” customs option had been put together.

He wrote on Twitter: “Ersatz Brexiteer @RobbieGibb almost blew the gaff on Monday 2nd by sounding off to his BBC mates about the “3rd way” customs option – forcing PM to explicitly deny it.

“24 hours later on Tues pm it appeared in a detail presentation in 9 Downing St by HMRC. Quick work guys!”

Mr Davis’ former chief of staff added: “I’ve got plenty more to say about the Government’s handling of #Brexit but all in good time.”

But Mr Jackson also revealed that he was blocked from acting as an aide to new Brexit Secretary Dominic Raab, who was announced as David Davis’  replacement on Monday.

He wrote: “Dominic Raab was gracious & generous in asking me to stay on but was overruled.

“I admit I stood shoulder to shoulder with DD to deliver Brexit & they annoyed the Europe Unit who are now running the show.”

According to The Times, leaked messages from staunch Brexiteers on messaging platform WhatsApp revealed the increasing unhappiness at Theresa May’s latest Brexit plan.

In a message written following Mr Davis’ resignation on Sunday, MP for Tewkesbury Laurence Robertson said: “The sycophants and careerists will rally around the PM and her position, whereas the rest of us will be fighting for the future of our country.

“Those will be the battle lines.”

It is the latest astonishing development in a chaotic week for the Prime Minister, who has been forced to also deal with the resignation of Foreign Secretary Boris Johnson on Monday evening – less than 24 hours after Mr Davis quit.