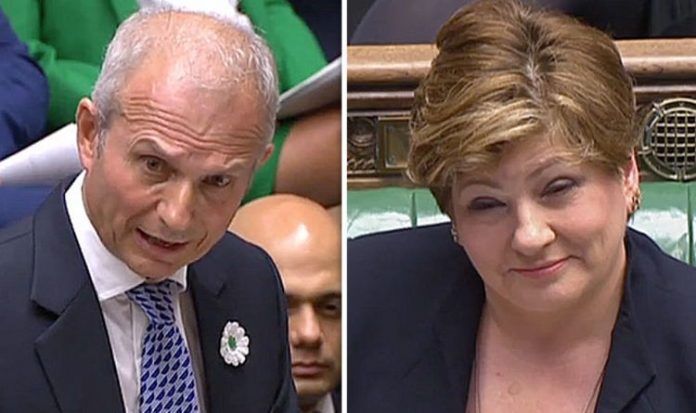 David Lidington, the Minister for the Cabinet Office and Chancellor of the Duchy of Lancaster, delivered a quick dig as he praised the success of the England football team in the World Cup.

The shadow foreign secretary resigned from the Labour Party frontbench in 2014 after a tweet about the England flag.

Mr Lidington said: “I am sure that all members, whatever part of the United Kingdom they come from would join me in congratulating Gareth Southgate and the England team for their fantastic performance in the quarter-finals on Saturday.

“And in wishing them the very best for this evening’s match against Croatia.

“I will happily buy the right honourable lady member for Islington South a flag to help to her join in.”

The Conservative benches in the House of Commons erupted with laughter at the swift jibe.

When the shadow foreign secretary stood up minutes later in the Commons, she said: “On the question of tonight’s match, I am afraid I am not going to be watching it.

“It will be the only game that I have missed. But I will be representing the Labour Party at tonight’s memorial event for the anniversary of the Srebrenica genocide. Something very close to my heart given my father’s role in trying to prevent it.

“But let me wish Gareth Southgate and the English team the best of luck for this match and hopefully for the final on Sunday.”

Ms Thornberry then took a swipe at the Government following a turbulent week for the Prime Minister over her Brexit policy.

She said: “I may know very little about football but even I can see that England’s progress so far at the World Cup shows what can be achieved when all the individual players work effectively as a team when there is a clear game plan, and when they are all working together.

“And, of course, when everyone respects and listens to the manager.”

Ms Thornberry resigned from the Labour shadow cabinet in 2014 after she posted a photo of a house with three St George’s flags hanging outside it.

Alongside Ms Thornberry’s tweet of the image, the caption read: “Image from #Rochester”.

The Labour MP faced huge backlash following the tweet and apologised for any offence caused.

At the time, former Prime Minister David Cameron claimed Ms Thornberry was “sneering at people who work hard, are patriotic and love their country.”