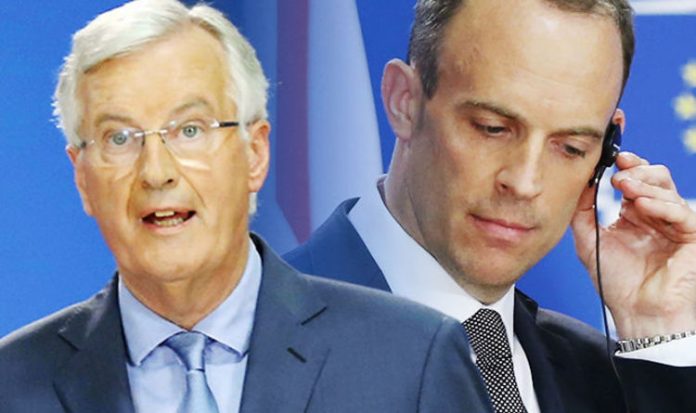 Mr Barnier said these three issues must be resolved – a hard border or legally operative Irish backstop, the protection of geographical indications and a political declaration of the future relationship between the EU and Britain.

The EU Brexit negotiator laid out these three vital hurdles during a press conference with Brexit Secretary Dominic Raab in Brussels on Tuesday.

The pair have met to try and hammer out a deal in time for an EU summit in Brussels in October.

Mr Barnier said that both negotiating teams have already made progress in one of the areas he has outlined.

He said: “Last week our teams already had a discussion on the island of Ireland and Northern Ireland.

“As you know we need a legally operational backstop within the right agreement.

“We must find pragmatic solutions in line with the commitments made by Prime Minister Mrs May in December and in March.”

He added: “We have have agreed that the EU and the UK will negotiate continuously from now on, and Dominic and I will meet regularly to move negotiations forward.

“We are far more advanced in defining common ground in policy than the economic relations.”

“This partnership has to respect the single market and the foundations of the European project, and if this is well understood we can conclude the negotiations successfully.”

It was confirmed the bloc is not actively working towards a no-deal Brexit, but the EU is preparing for the scenario.

Mr Raab said Britain is confident that a Brexit agreement with the EU can be reached by October.

He said: “If we have that ambition, that pragmatism and that energy on both sides, I’m confident we can reach that agreement by October.

“There are still gaps, we’ve had an honest conversation about those.”

Mr Raab added he wanted the sides to try agreeing on a political level what they have so far failed to iron out in technical talks.

Mr Raab is expected to deliver a major speech on the negotiations later this week and the Government is scheduled to begin releasing a series of more than 80 technical documents setting out preparations needed in case the talks collapse without a deal.